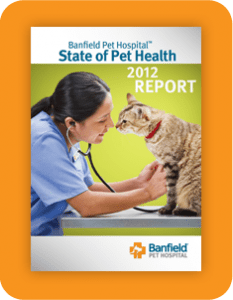 Do you think you know the five most common cat diseases? The findings in Banfield Pet Hospital’s State of Pet Health 2012 Report may surprise you.

The report captured and analyzed data from nearly 430,000 cats in 43 states over a period of five years. The driving force behind the study was a commitment to preventive care and early diagnosis. In addition to collecting medical data, the report also identified pet owner perceptions. For this part of the report, Banfield polled more than 1,000 cat owners in the United States.

The report also captured date from more than 2 million dogs. This discrepancy in cat vs. dog numbers highlights the prevalent trend that dogs get far more attention when it comes to medical and health studies than cats do. According to pet journalist Steve Dale, for every dollar devoted to cat health research, five to ten dollars are devoted to feline research.

The findings are disturbing: since 2007, obesity in cats has increased 90 percent, and yet, 69% of cat owners believe that their cat is just the right weight. Obesity can lead to serious health problems, including diabetes, heart and respiratory problems, joint disease, and a compromised immune system.

Heart disease is often called the silent killer, and nowhere is this more true than for cats. Because the physical signs may not be visible in early stages of the disease, many cats go undiagnosed until the disease has progressed. According to the report, at least 3 in 4 cat owners are not aware that vomiting, dental disease and weight loss can be associated with heart disease, and more than half (54%) of cat owners are not aware that aging can also be associated with heart disease.

The prevalence of kidney disease has increased by 15% since 2007. According to the report, At least 3 in 5 cat owners are not aware that diarrhea, vomiting, lethargy or weight loss can be associated with kidney disease. Kidney disease is a progressive and chronic condition, and early diagnosis is critical for successful management.

Hyperthyroidism is most commonly seen in senior cats. If left untreated, it can result in heart and kidney failure. 4 in 5 cat owners are not aware that changes in a cat’s coat or unusual urination habits can be highly visible sign associated with hyperthyroidism, and less than half of cat owners (45%) realize that changes in appetite can also be a sign of the condition.

The prevalence of arthritis has increased 67% in cats over the past five years. It is unclear to me (and not addressed in the report) whether this dramatic increase is due to cats living longer, or to cat guardians being more aware that cats get arthritis, too. I believe that arthritis has been underdiagnosed in cats because cats are masters at masking pain. The report shows a clear link between arthritis and obesity: 37% of arthritic cats were also overweight – a connection that 2 out of 3 cat owners are not aware of.

It is Banfield’s hope, and I echo this, that reports like this one will help educate cat owners and veterinarians about the chronic diseases that affect cats. It is my hope that someday, cats won’t be treated as second-class citizens when it comes to studies and research. This report is a good start.

For more information, you can download the complete State of Pet Health 2012 Report.

I know that Conscious Cat readers are better educated than the average cat guardian. However, even I was surprised by some of the report’s findings, and I’m curious: which of these surprised you the most?