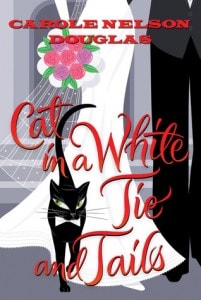 In Cat in a White Tie and Tails, the twenty-fourth book in the series, Louie accompanies Temple and her fiancé, rising media star and former priest Matt Devine, to Chicago so she can meet his family. Louie is catnapped right out of Matt’s mother’s living room. In a series of twists and turns, the kidnapping leads the reader back to Las Vegas. Meanwhile, Las Vegas homicide detective Molina has commissioned Temple’s former boyfriend, magician Max Kinsella, who suffers from amnesia following a recent attempt on his life, to help solve some old cold cases. In a series of wild twists and turns, involving Molina’s former boyfriend and father of her daughter as well as stonecold killer Kitty the Cutter who may have returned from the dead, Louie and his partner in crime and his daughter, Midnight Louise, have their paws full trying to tie up all the loose ends in a fast-paced, fun read that will leave the reader breathless.

If you’re a fan of the series, you will love this latest book. It brings many of the characters from previous books back together, and it will leave you eagerly anticipating the next installment. The author provides enough backstory so that you’ll be able to enjoy the book even if you’re new to the series, but be forwarned: most likely, you’ll want to read the entire series after finishing this one.

I am very excited about two things:

Award-winning ex-journalist and novelist Carole Nelson Douglas’s almost sixty novels range from historical and contemporary mystery and romance to science fiction thrillers to high and urban fantasy. Douglas was the first author of a Sherlockian series with a female protagonist, diva-detective Irene Alder, the only woman to outwit HolmesD. ouglas says if she has a literary muse, it’s definitely feline: mysterious, wise, playful, and packing sharp shivs in velvet gloves. For more information, please visit CaroleNelsonDouglas.com.

28 Comments on Review and giveaway: Cat in a White Tie and Tails by Carole Nelson Douglas