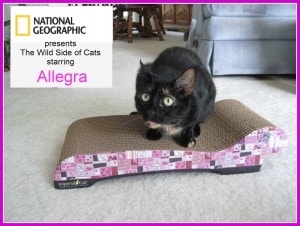 There was a lot of excitement at our house last week when I was contacted by a British production company making a special for National Geographic, provisionally called “The Wild Side of Cats.” The program looks at the behavior of domestic cats and examines how that compares to big cat behaviour in the wild.

The production company came across a video clip that I shot of Allegra testing the new Imperial Cat Scratch ‘n Shapes Sofa Scratcher Chaise. I always knew Allegra was a world-champion scratcher, but apparently, her technique in the video clip is so perfect that they might use it for the special they’re filming.

Allegra hasn’t let her potential fame go to her head. She still deigns to spend time with Ruby and me, and aside from occasional remarks such as “I should be fed first, because I’m going to be famous,” she’s taken things in stride.

If the clip will be used, we’ll receive a DVD of the show, and of course, Allegra will make sure that her PR peeps (translate: me) will notify you if and when the show will be aired. In the meantime, all requests for interviews and public appearances should be directed to me.

Here’s the video with the apparent star-making potential:

January 17, 2013 update: we just received confirmation from the production company that the clip will, indeed, be used for the show!

33 Comments on Allegra’s World: I’m going to be famous!