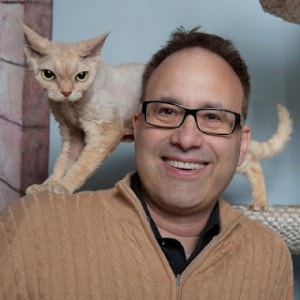 Steve Dale is one of the most dedicated champions of cats, cat health and cat behavior you’ll ever encounter. He is one of the co-founders of the CATalyst Council, a member of the board of directors of the Winn Feline Foundation, the American Humane Association, and the Tree House Humane Society, a cat shelter in Chicago. This pet expert, writer, radio and tv personality and cat lover extraordinaire is passionate about cats’ health and happiness.

Steve’s passion for cat health extends into many areas, but one particularly close to his heart, no pun intended, is feline heart disease, specifically, feline hypertrophic cardiomyopathy or HCM. HCM is the most common form of heart disease in cats. It is also the number one killer of cats between the ages of 1 and 10, and, according to Steve, could well be the number one cause of death in cats overall.

At a recent symposium hosted by the Winn Feline Foundation, a leader in funding cat health research projects, Dr. Leslie Lyons of the University of California at Davis and Dr. John Rush of the Cummings School of Veterinary Medicine at Tufts University presented the most recent information on this feline disease. I asked Steve to summarize what he learned.

“There’s good news and bad news,” said Steve. The good news is that there is now a genetic test available for Maine Coon and Ragdoll cats, two breeds that are genetically predisposed to HCM. A simple cheek swab can identify whether a cat has the genetic defect. Armed with this knowledge, responsible breeders could potentially be at the forefront of eventually eradicating the disease from these breeds. However, not all cats are Maine Coon or Ragdoll cats. Even though the disease is more prevalent in some breeds, it does affect all cats, and more research is needed to find out why that is the case.

Another piece of good news is a new blood test which can help detect HCM early. The Cardiopet ProBNP test can differentiate between something that looks like heart disease, such as upper respiratory illness or feline heartworm disease, and actual heart disease.

The bad news is that there’s still a long way to go. Even though a recent report issued by Banfield Hospitals on The State of Pet Health states that the incidence of HCM in cats has declined by 14% since 2007, Steve is not sure how significant this number is. The report tracks data received from more than 800 veterinary hospitals across the US, but veterinary visits for cats have declined over the  past few years, which may skew the data. Additionally, the report does not take outdoor cats into account.

Drug therapy for HCM, while available, is helpful in providing better quality of life, but it does not cure the disease, and that’s just not good enough for Steve. “I want something that makes these cats better.”

Why is Steve so passionate about finding a cure for HCM? It’s all due to a little Devon Rex named Ricky. Ricky was one of these special cats that leave huge paw prints on the hearts of their humans. “We had an amazing bond,” said Steve. “When people ask me about which of my pets was the most special pet, they always expect the answer to be something like ‘Lassie’. Well, if I fell in a well like Timmy, I bet Ricky would have rescued me.”

The special bond between Steve and Ricky began from the first day Steve laid eyes on Ricky. It only increased when Steve discovered that Ricky had amazing talents. When Ricky was about 6 months old, Steve’s dog Lucy participated in an animal assisted therapy program. Steve’s wife decided that they should do something else with Lucy to keep her from getting bored, and Steve said “let’s teach her how to play the piano!” He got a kid’s piano, and began clicker training Lucy to play. She did okay, but it was slow going. One day, Ricky walked into the room, took one look at the piano, and started to play. Steve laughed. “Why am I fooling around with this dog!” 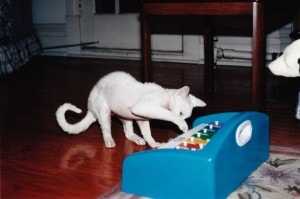 From that point on, Steve took Ricky for piano recitals to local pet stores. Ricky was featured on several national television programs and on virtually every local Chicago station. “Had YouTube been around back then, Ricky would have gone viral,” said Steve. In addition to being a virtuoso piano player, Ricky could also jump through hoola-hoops and leap across childen or dogs in a “down/stay” position.

When Ricky was one year old, he was diagnosed with HCM after he performed one of his concerts for the staff at his veterinary clinic. When Steve saw the look in the veterinarian’s eyes after she examined Ricky, he knew something was wrong even before she pronounced Ricky’s diagnosis. Ricky he was put on daily heart medication. He took his pills readily, and on days when Steve would forget to give him his pill, Ricky would remind Steve by jumping on his shoulder.

Ricky died suddenly at four years of age. “He was doing his favorite thing in the world when he died,” said Steve. “He was eating.” I could still hear the pain in Steve’s voice when he spoke about Ricky’s passing.

In 2002, the Winn Feline Foundation established The Ricky Fund for HCM Research in Ricky’s memory. The fund has raised more than $100,000 to date. Even though the fund has held up well during this economic downturn, it is close to being depleted, and more funding is desperately needed to continue funding research that will save cats’ lives. Sadly, the reality is that for every dollar spent on cat health research, 10-15 dollars are being spent on dog health research.

Even though Steve will always miss Ricky, knowing that his legacy lives on by funding research to help other cats with this devsastating disease eases Steve’s pain a little. “I would like to see heart disease in cats solved in my lifetime,” said Steve. He thinks this dream is achievable. “It will take brilliant researchers, a little bit of good luck, and money.”

There are two ways you can help Steve fight HCM. Make a donation to The Ricky Fund (specify in your donation that that’s where you’d like the money to go), and help spread the word about the fund and the need for additional funding and research to make HCM a thing of the past.