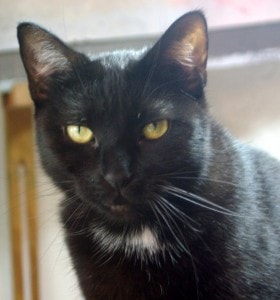 Carl Miles credited his psychic ability with his decision to adopt a jet black cat one day in 1975. Unemployed in his mid 20’s, and staying at a Columbia, South Carolina rooming house, he initially said no when a girl cradling a box of three kittens came to the porch, asking if he wanted one. Then a premonition struck. As a boy, Miles claimed he could see things before they happened—things people were about to say, or about to do. He had that feeling again on the porch. “As she was walking away, something told me in my mind, ‘Take the black cat’,” he later told The Charlotte Observer. “And I called her back.”

One afternoon, when the kitten—now named Blackie—was about five months old, Miles had him on his lap, playing with him and talking to him. A premonition struck again. A voice inside his head said, “The cat is trying to talk to you.” At that moment, Miles resolved to teach Blackie to speak. He spent the next year and a half taping the noises the kitten made, and he’d play him back the ones that sounded most like English. By his second birthday, Blackie was able to say “I love you” and “I want my momma.” The cat was ready for prime time.

Miles and his wife paraded Blackie down the streets of Columbia, the cat in a harness and draped over the man’s shoulder. When passers-by would inquire about the feline, Miles offered to make him speak, usually for a quarter or two. He’d squeeze Blackie’s rump, and if people used a bit of imagination, they’d swear they just heard a cat talk. (Listen for yourself here at the 25-second mark.) “Blackie the Talking Cat” became famous. He was interviewed on radio shows, appeared on TV’s “That’s Incredible!”, and even cut a 45 rpm record: “A Special Christmas featuring Blackie the Cat that Talked.”

By 1982, Miles and his wife had taken their act to Augusta, Georgia. And that’s where they ran into trouble. Responding to complaints from local citizens evidently unnerved by hearing a cat speak, police charged the couple with operating a business without a license. Miles fought the city. He noted that its laws did not define a talking cat as a business. He also argued that Augusta was violating the U.S. Constitution’s right to freedom of speech—both his and Blackie’s. The judge would have none of it. Though he himself had heard Blackie talk—thanks to a chance encounter with the Mileses on the streets of Augusta—he concluded that the cat was the couple’s sole source of income and thus constituted a business. In a ruling that referenced everything fromGarfield to Dr. Seuss, the judge wrote:

For hundreds, perhaps thousands of years, people have carried on conversations with cats. Most often, these are one-sided and range from cloying, mawkish nonsense to topics of science and the liberal arts. Apparently Blackie’s pride does not prevent him from making an occasional response to this great gush of human verbiage…

But just because Blackie talked back, the judge noted, didn’t exempt him from the laws of the city.

Miles appealed the decision. A federal court, however, was no more understanding. In 1983, The United States Court of Appeals for the Eleventh Circuit pronounced Miles’s argument that Blackie did not represent a business “wholly without merit.” It also addressed the Constitutional issue:

This Court will not hear a claim that Blackie’s right to free speech has been infringed. First, although Blackie arguably possesses a very unusual ability, he cannot be considered a “person” and is therefore not protected by the Bill of Rights.  Second, even if Blackie had such a right, we see no need for appellants to assert his right jus tertii (“by a third party”). Blackie can clearly speak for himself.

Defeated, Miles got the business license. And though he continued to sell T-shirts sporting his loquacious feline, Blackie’s fame waned. In 1989, Miles, suffering from cataracts, stopped exhibiting the cat. He moved his wife and the feline back to South Carolina. People still stopped by from time to time, however, to hear Blackie talk.

A couple of days after Christmas in 1992, Blackie died. He was 18 and suffering from seizures, liver failure, and heart problems. In the parking lot of the veterinarian, Miles and his pet had a final conversation. “Blackie looked at me one last time and said, ‘I love you.’,” he told The Charlotte Observer. He and his wife buried the cat in their back yard. As far as anyone knows he’s still there, under a patch of weeds.

Blackie’s voice may have been silenced, but his words echo on in one of the most unusual free speech cases in U.S.history.

David Grimm is an award-winning journalist and deputy news editor at the journal Science. He is currently writing a book about the changing status of cats and dogs in society. You can read more about his book on his website and follow him on Twitter.

Thank you for voting every day!

7 Comments on Do cats have the right to free speech?