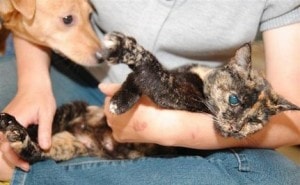 There’s a beautiful monastery by the hills of a conservatory forest in West Java, Indonesia and I had an opportunity to stay there during a religious outing last December. The best part was dinner because, at that time, various indigenous animals from nearby conservatory would go down to the smell of our food and peer at us. Two wild dogs even came round the camp fire and naturally, got a fair share of a healthy meal.

My attention was rather drawn into a quiet, almost invisible presence near my group; a tortoise-shell cat who sat silently as she stared toward us. Whenever someone left the circle, one of the dogs would follow, and the cat would run away, so I think she must have been afraid of the dogs. However, that night I put a plate of rice, chicken (from my group mate) and scrambled egg just outside my room, where she previously sat, and went to sleep.

The next day I woke up rather early, wondering how she was doing, and whether she ate the food I left for her, but I didn’t need to wonder for long. There she was, curling up at the corner of my bed, peacefully asleep. For the next few days I kept putting out a plate of rice and meat, but she only took the scrambled egg.

At the last night of the outing, I saw her stroll leisurely into my tent even before dinner. She curled up on my bed, so I skipped dinner and followed her. She purred when I stroked her. I figured she was familiar enough with me, so I put her plate inside the tent and watched her eat, but again, she only ate the egg.

Only one tooth remains.

Out of curiosity, I tried to checked out her teeth, and found out that she doesn’t have any. None at all except for one lower left fang.

No wonder she was so thin. I cannot imagine how hard her life must be without the ability to hunt or eat properly. So I decided that night that I would bring her home, and the next day, smuggled her in my knapsack so no one would know that I was carrying a cat back to town. Luckily all of my group were animal friendly, so they just shrugged when they saw me empty my knapsack and roll all my things in newspaper. Josie’s antics strike again. Well, at least they don’t tell anyone.

She is a Sweetheart

Tortie is the kindest, gentlest, and most understanding cat I have ever known.  She hardly moved on our way home, so the bus driver didn’t know he had an extra passenger.

Under my care, Tortie got the best meals possible. Finely ground chicken or fish (meat only) and her favorite egg, but without teeth, she licks and swallows almost whatever food comes into her mouth. The lack of proper chewing probably contributes to her difficulties with stool (she litters once every two days) and her stomach bloats easily. She has to depend on a digestive aid to properly digest her food.

She has so much love to give.

Living together with my other rescues and fosters prompted a different attitude. Knowing that she is defenseless, she withdraws from playing with other cats. She stands only to go to her bowl of food and water, to the litter box, and then returns to the protection of her bed. She avoids contact with other cats as much as she possibly can. She lacks exercise and is prone to gaining weight, especially after she was spayed. The vet was bewildered at how had she managed to survive all along.

And even with so many limitations, she still reached out when she voluntarily adopted two kittens that I recently rescued, to the point of willingly nursing them despite her dried-out teats. She diligently groomed the kittens and never left their side. 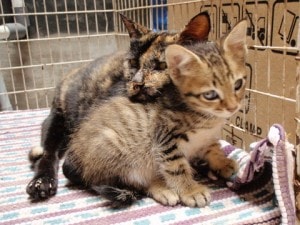 Seeing Tortie is witnessing a grace from God, in the form of a mother:  her tolerance, her acceptance, her gentle willingness, her abundant love that gave her strength to take in stranger kittens and raise them as her own, and such loveliness gave me strength to carry on my dirty job as an animal rescuer.

Josephia T. Liem runs the Whisker’s Syndicate in Bandung, Indonesia. If you’d like to help Josie with her efforts, you can find a list of needed items, as well as an easy way to make cash donations, on her website.

This story was originally published on Care2’s Animal Welfare Cause section by Laura Simpson, and is reprinted with permission. Laura is the founder of both The Great Animal Rescue Chase and the Harmony Fund international animal protection charity. Embracing a faith in the divine and in the goodness of humankind, Laura gladly balances her rescue work, motherhood and marriage in a cozy little home filled with whiskers.

You can vote once a day, every day, through July 31