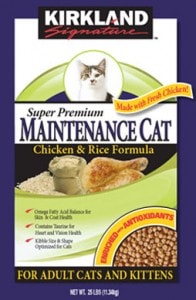 Diamond Pet Food began recalling certain lots of various dog food brands due to possible salmonella contamination in April. The recall has now been expanded to include two products for cats sold at Costco:

To determine if their pet food is recalled, consumers should check the production codes on the back of bags that have a number “2” or a “3” in the 9th or 10th digit and an “X” in the 11th digit. The best-before dates for the recalled brands listed above are December 9, 2012 through April 7, 2013.

This is a developing story. Diamond Pet Food makes foods for a lot of different brands (refer to the list on the Recall Information page). So far, the two foods mentioned above are the only cat foods implicated in the recall, but the list of dog foods keeps growing, and I wouldn’t be surprised if there will be additional cat foods added.

The Centers for Disease Control is reporting that 14 people in 9 states have become sick with salmonella infections from handling contaminated dog food involved in this recall – 5 of them are hospitalized.