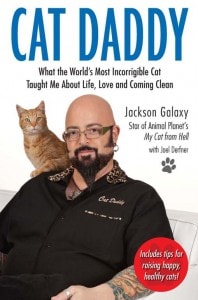 Jackson Galaxy’s long awaited first book, Cat Daddy: What The World’s Most Incorrigible Cat Taught Me About Life, Love, and Coming Clean, is coming out Thursday, May 10. You can still pre-order the book and help homeless cats at the same time: Jackson’s publisher will donate $1 for every pre-order, click here for details on how to make your pre-order count.

This book is no ordinary cat memoir, nor is it an ordinary cat advice book. It is an inspirational tour de force that offers an intimate glimpse at Jackson, the man, and Jackson, the Cat Daddy. This is one of the most unconventional memoirs I’ve ever read, but then, I didn’t expect anything less from Jackson.

Jackson Galaxy defies convention. Bald, bearded and tattooed, he’s anything but what you would imagine a cat behaviorist to look like, let alone one who has an almost uncanny ability to connect with cats in ways that few others can. Rock musician? Maybe. Biker dude? Possibly. But cat guy? No way.

Cat Daddy chronicles Jackson’s journey from down-and-out drug-addicted musician to cat behaviorist of last resort to countless cats, from his early work with cats at an animal shelter in Boulder to his partnership with Jean Hofve, DVM and their joint ventures, Little Big Cat and Spirit Essences, which Jackson eventually bought from Hofve, to his own successful behavior consulting practice.

But the real star of this book is Benny, a small grey and white cat who was brought to the shelter where Jackson had begun to build a reputation as a “cat whisperer.” Benny had been hit by a car and had a broken pelvis, his owner couldn’t afford the vet bills, and she also “just didn’t like him.” Benny was only supposed to be a foster cat, but as Jackson watched Benny’s remarkable recovery from his physical injuries, something shifted for Jackson. He began to feel a kinship with this broken cat, and realized that “Benny wasn’t my foster cat anymore. He was my family.” That moment may have saved not only Benny’s life, but Jackson’s as well. And this was only the first of many lessons Benny would teach Jackson about not being in control of the universe. “The teacher arrived when the student was ready to learn.”

In addition to his physical injuries, Benny had his share of emotional problems. It soon became obvious that Benny didn’t just come into Jackson’s life so Jackson could fix him; Jackson needed some serious fixing himself. By the time Benny arrived, Jackson’s life was spiraling out of control at an alarming rate. As Jackson began to work with this emotionally damaged cat, Benny did what noone else in Jackson’s life had been able to do: he forced Jackson to begin to peel away the layers of denial, and helped him discover his true physical, spiritual and emotional self beneath his multiple addictions.

There are many deeply moving moments in this book. For me, one of the most most touching passages was the moment Jackson surrenders control. His “hit the knees” moment was reinforced when he realized that “Benny is not just a cat who I take care of but a confused, frustrated being who is exactly the same as me.”  At that moment, Jackson not only found the process he’s since used and still uses today with every cat he works with, he also learned he could be “present in the moment for an animal who needed me to be present in the moment.” Being present and living life one moment at a time is one of the cornerstones of recovery. Benny had shown Jackson the way.

The book is interspersed with plenty of Jackson’s Cat Mojo 101. He introduces his famous “Cat-I-Love-You” technique (also known as the “slow blink”) with the remarkable story of the “forty-five cat kisses”at the Boulder shelter. His “Three-Step Handshake” was born when he first met Benny. In “Don’t Be a Litter Box Baby,” Jackson provides easy to implement steps to address litter box problems. As with so many of his techniques, Benny proved to be a hard core test case for this one as well.

All of Jackson’s advice takes the cat’s perspective into account, and comes from the premise that once you understand why something makes sense to a cat and respond from that same place, you will see changes in the cat’s behavior. Jackson understands that cats are energetically sensitive, and he focuses as much on training the cat as he does on training the cat’s human, always stressing the importance of the cat’s guardian managing his own energy and emotions when around the cat.

Jackson’s writing style is emotionally raw, candid, and sometimes shocking in its honesty. The one constant throughout his story, even during his darkest days of battling his own personal demons, is his connection with cats in general, and with Benny in particular.

In true cat like fashion, Benny taught Jackson about living in the moment, about surrendering control, and ultimately, about love. The cats of the world, and those of us who love them, owe a debt of gratitude to Benny for saving Jackson’s life and for being his teacher – and to Jackson, for the courage to share his story with the world, and for honoring Benny’s legacy each and every day through his work.