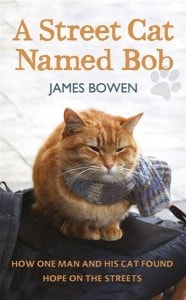 I love stories about people who change their lives for the better. I love those stories even more when the catalyst for that change is a cat (pun intended). I was pretty sure that I would love A Street Cat Named Bob: How One Man and His Cat Found Hope 0n the Streets. I wasn’t prepared for just how much I loved it.

I had head the story of James Bowen, a down on his luck British street musician who was busking the streets of London with his orange cat Bob. Bowen and his cat caught the attention of Mary Pachnos, a literary agent who had represented the British edition of Marley and Me. One day, Pachnos asked Bowen whether he’d ever thought about writing a book about Bob. A little over a month after its publication, the book has landed on British bestseller lists, and already, translation rights for several different countries have been sold. I wouldn’t be suprised at all if Hollywood snapped this story up.

When James first found Bob on the doorstep of his apartment building, he couldn’t have known how much this orange (or ginger, as the British call this coloring) cat would change his life. James was living hand to mouth on the streets of London, and had just moved into subsidized housing as part of a drug recovery program after being homeless. The last thing he needed was a pet. But he just couldn’t turn his back on the injured cat, so he took him in and nursed him back to health. He never intended to keep him. Once Bob had recovered, James sent him on his way.

But Bob had other plans. He kept coming back to the apartment building, and followed James everywhere. Soon the two became inseparable, and Bob began accompanying James on his daily trip to work into London via bus and Tube, the London underground metro system. The two became a fixture and familiar sight to many Londoners. People were charmed by Bob, and James started earning more money for his performances than he ever had before. Eventually, James got a job selling Big Issue, a newspaper published on behalf of and sold by homeless people to help them get a step up in life. Bob always tagged along.

This uplifting story touched my heart. The bond between James and Bob is so incredible, it brought tears to my eyes at times. As much as I love cat books, it’s rare that I come across one that I just can’t put down. I couldn’t stop turning the pages of this one.

James is brutally honest about his past and his struggle to recover from his drug addiction, and he’s equally honest about how much he came to love Bob. Following the journey of these two soulmates was pure joy. I only wished that I lived in London, so I could actually meet Bob. Oh, and James, too.

If you’re not convinced yet that you have to read this book, take a look at the book trailer:

The book will be published in the US by St. Martin’s Press in the spring of 2013. It is currently available on Amazon on Kindle.

James Bowen is a street musician in London, England. He found Bob in the spring of 2007, and the pair have been inseparable ever since.

*** Coming soon on The Conscious Cat: an interview with James Bowen! ***