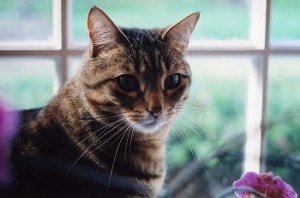 In recent weeks, there have been numerous reports of cats who could detect serious illness in their humans, and who even saved their humans’ lives. We previously reported on a woman in Wisconsin whose newly adopted cat alerted a family member that she was having a seizure. There’s a cat in England who “diagnosed” her human’s breast cancer before doctors found it, and a cat in Virginia who saved her human from dying from a brain aneurism.

Several studies have shown dogs’ ability to distinguish people with both early and late cancers from healthy controls. It is believed that dogs can identify VOC’s (volatile organic compounds) that are present in a person’s breath who has cancer. Seizure dogs alert their owners to an impending epileptic seizure; how dogs do this is a mystery, but some trainers and researchers think they detect subtle changes in human behavior or scent before an episode occurs. I have not found any research done with cats, but I don’t think it’s too much of a leap to assume that cats would be as sensitive to changes in a human’s body chemistry as dogs – if not more so.

Cats and their humans often mirror each others’ physical and emotional states.  Cats are sensitive creatures as well as natural healers, and in my Reiki practice, I’ve sometimes seen them take on their human’s problems.  Because of the bond shared between cat and human in a close relationship, energetic imbalances may be shared as well. So why wouldn’t they also be able to detect illness before it manifests?

I find this topic particularly fascinating since I’ve always believed in the healing power of cats. The Chicago Tribune recently reported that a 10-year study at the University of Minnesota Stroke Center found that cat owners were 40 percent less likely to have heart attacks than non-cat owners. According to research discussed in this news report, people with pets save the Australian health service about $880 million per year and save Germany about $6.6 billion per year.

Those of us who share our lives with cats don’t really need scientific proof that cats are good for us, but isn’t it nice to know that they’re not only good for our emotional health, they’re also good for our physical health, and might even save our lives?

Have you had a purr-sonal experience with your cat either sensing that something was wrong, or helping you heal?

Please click on the image above to vote for us for
Best Website About Cats
Last day to vote!

26 Comments on Cats are good for your health