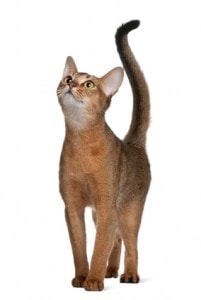 Learning how to read feline body language is one of the best ways to understand your cat. Even though cats express themselves vocally, they primarily use their face, tail and body to communicate with each other and with the humans in their lives.

Watching a cat’s eyes, ears and tail can speak volumes about what the cat is trying to tell humans or other cats.

A cat’s eyes can give you many clues about her emotional and mental state. Wide open eyes are an indication of trust. Eyes that stare without blinking can be an attempt at dominance. A slit-eyed look can be a sign of aggression or fear. This is different from the sleepy-eyed look, when a cat appears to blink at you, which is generally thought to be a sign of affection.

Since cats know how to interpret these signs between each other, they’ll most likely also interpret them in the same manner when they are coming from you. Never stare directly at a cat you don’t know, this may prompt an attack. On the other end of the spectrum, if your cat sends you a “slow blink,” return it. Your cat will interpret it as “I love you” in feline speak. 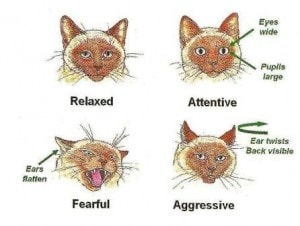 A relaxed and happy cat will have her ears pointing slightly to the side and slightly forward. If the ears go straight up, something has captured her attention. Twitching ears usually indicate nervousness or fear. If the ears start moving backwards, it’s an indication that the cat is getting annoyed or frightened. This is a clear signal to back up. If it happens while you’re interacting with your cat, stop doing whatever it is you’re doing. Ears flattened backward against the head show a cat in full aggression mode.

The cat’s tail is equally communicative. A friendly and relaxed cat will have her tail straight up into the air. The tail may even quiver: this is a sign that the cat is happy to see you. A cat whose tail is straight up in the air, but with a slight curve in the tip of the tail, is still happy, but perhaps, a little bit unsure. A tail extended straight back is still a friendly sign. This could be considered a “neutral” gear. The cat is not fearful or aggressive. A tail curved around the cats’ legs like a statue shows that the cat is alert and interested.

Once the tail goes straight down, this signals the beginning of aggression. A slight curve at the top of a tail that goes straight down may express a slightly aggressive, defensive stance. Watch out if your cat’s tail become puffed up: this is either a sign of aggression, or fear. Approach with caution. A swishy tail indicates anger, excitement or irritation. 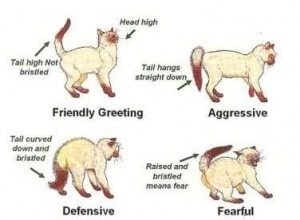 Learning to watch and understand your cat’s body language can help mitigate problems in a multiple cat household, and it can go a long way toward avoiding any misunderstandings between cat and human. Your cats will thank you for it.