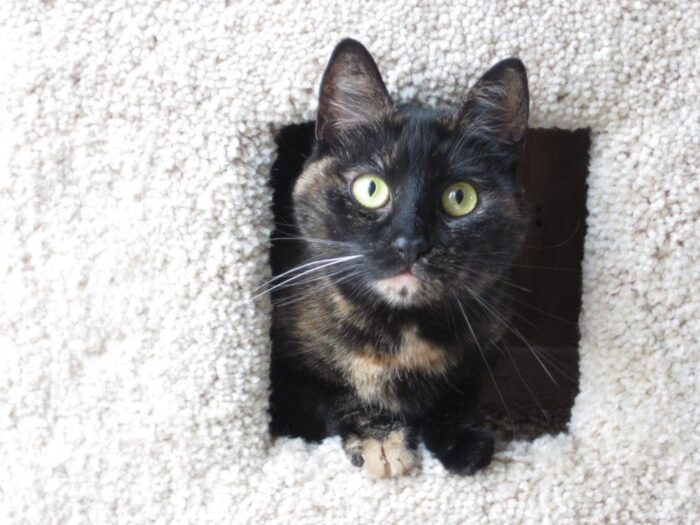 Boy, do I have a story to tell today! I know Mom loves me, and everything she does is for my own good (or so she tells me), but sometimes, you have to wonder about these humans.

The other day, I was snoozing on Mom’s lap, all nice and cozy, just loving my life and being close to Mom, when the doorbell rang. Allegra and I ran to the top of the stairs to see who was coming to see us. I always let Allegra go first. She’s the official greeter, and with very few exceptions, I’m a little shy around new people. Mom seemed happy to see the woman who came in, and Allegra ran down the stairs to greet her.

I wasn’t so sure. I had vague memories of that woman. She’d been at our house before, I just couldn’t remember when. Mom invited her to come into the living room, and she and Mom sat down and started talking. Then it hit me: of course! The last time she was here, I wasn’t feeling so good. My tummy was upset back then, and I had to keep going to the litter box. And in the middle of all of that, that woman had come by and she was squeezing me and looking inside my mouth. Now that I remembered, I was watching her and mom closely – but you better believe it was from a distance.

After a few minutes, Mom got up and tried to pick me up. Oh no. I wasn’t having any of that, and I ran away from her. But I can never stay away from Mom for long, not when it means there could be hugs and kisses involved, so I let her pick me up. But what was Mom doing? She was going to where that woman was sitting, and she sat down right next to her. I was not pleased, and I wiggled and tried to get away from Mom! Traitor! Mom put a treat in front of me, but I wanted nothing to do with it. I was mad!

Eventually, Mom got me to calm down, and I have to admit, the woman’s energy was kind of nice. She was really calm, and when she did touch me, it was very gentle. But then she put her fingers around my mouth and forced it open! Excuse me lady, but I really don’t know you well enough for you to get that intimate with me! Then she ran her fingers all along my body. That was sort of okay, it almost felt like being petted. Then she got out this weird round disk that had rubber tubes attached. She put the disk on my heart. I tell you, humans do some of the strangest things. Finally, both her and Mom took their hands off of me, and I ran away! I ran like the wind!

But I was too curious to see what was happening, so I didn’t go far. Mom and the woman were still talking. Then Mom got up and grabbed me again. Hey! I thought we were done with this! She put me in a plastic tub with  numbers on it that had magically appeared on the dining room table. Apparently both her and the woman were happy with the numbers when I sat in it. This time, when Mom let me go, I wasn’t taking any chances and stayed away from both of them. But apparently they still weren’t done with me, because Mom grabbed me again, and the woman came at me with a pair of nail clippers. Ugh – I hate having my nails trimmed, but since this happens once a month, I also knew it would be quick, so I didn’t put up too much of a fuss.

It looked like they were finally done with me, so I decided to hang around to see what would happen next. And then I saw Mom grab Allegra. Teehee! It was her turn! Mom tried to put her in the plastic tub with the numbers, but Allegra wasn’t having any of it. She nipped at Mom, and then at the other woman. But Mom had a good hold on Allegra, and took her back to the sofa, where the woman quickly trimmed her nails. But she didn’t do any of that other stuff to Allegra. Hey? How come she only gets her nails trimmed? Is she some kind of special?

Allegra said the woman is our vet, and that Mom makes her come over at least once a year to make sure we remain healthy and happy. I guess that’s okay. I just wish it wouldn’t involve all that poking and prodding.

Ingrid’s note: Ruby was due for her annual check up, and I also wanted to have Dr. Tasi recheck her gums. Back in October, we noticed that she had some mild gingivitis. Dr. Tasi gave her a homeopathic remedy then, and I also started brushing her teeth daily. I was thrilled to see that it had made a big difference. Ruby’s gums look healthy, and there was no tartar on her teeth.

I never used to brush my cats’ teeth. Ruby and Allegra are the first. I never thought I’d be able to do it, but, after following a 4-week training program on brushing your cat’s teeth, it has become so much a part of our routine now that the girls will actually remind me on the rare evening that I forget! I’m sure their raw diet makes a difference, too, but I’m convinced that the regular brushing plays the biggest part in reversing Ruby’s mild gingivitis. Allegra had some very minor tartar on her back teeth at her last check up in December, but her gums looked great. I now make a conscious effort go get at those back teeth each day.

8 Comments on Ruby’s Reflections: Ruby Gets a Visit from the Vet