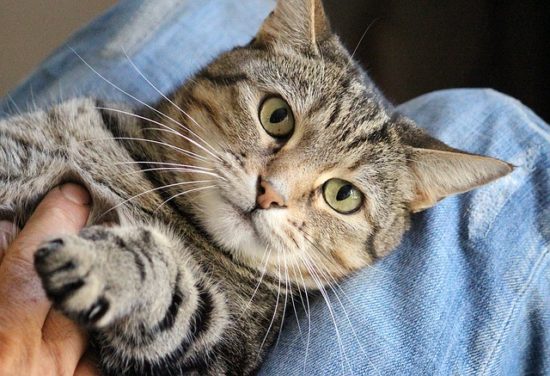 This stuff always seems to come in clusters. I spent some time counseling the first foster about why his cat was biting him. I spent even more time counseling the second foster. Then I worked with the adopter who had the same issue. It finally took Jackson Galaxy’s My Cat From Hell on Animal Planet doing an episode where every cat bit his or her person, for me to see the, ah, cat scratches on the wall. Or bites on my arm.

Why does my cat attack me?

I  can’t tell you how often I hear “why does my cat attack me?” Let’s start with full disclosure – I have a cat with “petting aggression.” “Aggression” isn’t really the right word, though that’s what it’s generally called. It’s not really aggressive – nor is it mean, nor is the intent to actually hurt someone.

Most people know how sensitive a cat’s whiskers are, and wouldn’t be rough with that spot on their faces. What people don’t realize is that while the muzzle contains the greatest number of whiskers, cats actually have them all over their bodies, on their paws, head, back… They’re smaller and finer, so not as easily seen, but if you look closely, they’re there.

Just as some people aren’t ticklish, some cats aren’t particularly sensitive about their whiskers, or about being touched. For some cats, however, their whiskers are ultra sensitive, and not just on their faces but everywhere. Imagine that you were incredibly ticklish, and that someone – for the sake of argument, someone you even liked a lot – wouldn’t stop tickling you. You’d be screaming “stop, stop,” right? Well, imagine now that you only spoke Urdu, but your tickler spoke only French. And because he didn’t understand, he wouldn’t stop. Eventually, what would you do – if he weighed 10 times what you did and you couldn’t get away? Right. You’d bite him, or hit him.

Cats’ thresholds for being touched vary

Those not-very-ticklish cats, they’re the exception. Those are the ones you can roll over and give belly rubs to. I have one of those, also. He’s a limp dishrag when you handle him, and he loves it. The extremely ticklish cats, they’re the exception, too. Most cats fall somewhere in the middle. The ones that exhibit petting aggression – they’re usually the friendly ones, the ones that seek out petting. And it’s not surprising that fosters and owners are surprised when the affectionate cat suddenly snaps and takes a bite out of the hand they love…

One of the intriguing things about cats is that they’re not dogs. You can pet a dog, all day, and he’ll only bite you if you stop. Cats… the sensitive ones… have a threshold. And, you have to understand how they tick, if you’re going to change their behavior. Dogs, they’ll modify their behavior because they want to please you. Cats, on the other hand, to change their behaviors, you have to convince them that they want to change. And that’s another difference between the species – discipline that works on a dog – is the wrong approach for a cat.

Before we talk about changing feline biting behavior, though, you need a little Urdu to French translation. When a cat becomes overstimulated from petting, she is actually telling you that she’s had enough – if you speak her language.

The most obvious sign is the tail. Dogs beat their tails back and forth when they’re happy. Cats give a slow flick of just the tip of the tail. When the whole tail becomes involved, swishing back and forth – that’s a warning. Also, watch the eyes, A calm, relaxed cat’s pupils will be narrow. When they dilate, the stimulation tank is full. Watch also the fur along the back and the back of the head. If a ridge stands up – or her skin ripples – the cat is also telling you, in cat-speak, she’s done. It’s like someone one time said to me after watching the Amityville Horror – you know, when your house tells you “get out…” Get Out! When the cat tells you she’s done – leave her be. If she’s on your lap, stop touching her.

How to pet a cat

When you do touch her, concentrate on her head, the sides of her face, and the back of her neck. Stay away from full body petting – you may get there eventually, but don’t try it in the beginning. Many cats get more sensitive toward their tails – you may have seen a cat who would stick his rump in the air if you petted him at the base of the tail – that’s a high stimulation spot. Also, the closer you are to the back of the head, the harder it is to whip around and bite you.

Now, that’s behavior modification for you – but I know that you want to change her behavior, too. It can be done.

How to conduct a petting session

Now that you know what to watch for, end the petting sessions before she’s had enough. Send her to the floor – but don’t touch her because she’s building up to a snap. Gently, slowly stand up and she’ll leap down. Then, give her a treat. If she does go too far and bite or swat, put her on the floor – again, by gently standing up. Don’t push her with your hands, and totally ignore her. Don’t push her off, don’t scold, don’t make eye contact, just totally shun her. Especially, don’t use a spray bottle, don’t tap her nose. Those techniques may work to discourage other behaviors, but retraining aggression with aggression is doomed to fail. You’re speaking French again, not Urdu, when you do that.

Don’t be surprised if she wants right back up fairly soon – cats recover quickly, and the petting aggressive ones seem to be the ones that want the contact to begin with. Let her back up and start over. At first, she won’t quite know what she did wrong – but she will quickly make the association between biting, and a “time out.” You may be able to help establish a calming atmosphere which will increase her tolerance by using a pheremone spray or plugins such as Feliway, or a flower essence such as Jackson Galaxy Solutions. Try spraying on a small blanket or towel, on your lap.

The last thing to consider is to embrace what the cat brings to you. She’ll sit with you, she’s affectionate – she just isn’t a cat that can be held, or excessively petted. The house is telling you, “get out” — don’t hold her.

I have a cat with petting aggression – but I haven’t been bitten in a long time. Working with the cat, understanding the cat – goes a long way toward producing desirable behaviors.

Harry Shubin is the newsletter editor for the Feline Foundation of Greater Washington. Harry’s entire family is involved in cat rescue: daughter Rachel writes the blog We Have a Situation, where she shares stories of her cat-related life.

328 Comments on Petting Aggression in Cats: Biting the Hand They Love