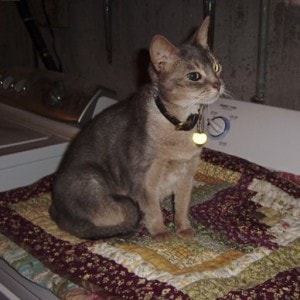 Guest post by Circe (as told to her human, T. J. Banks)

Phoebe was going to write this guest post. But she knew that I had a story to tell, so she said I could take her turn. She’s a good friend. And it’s a good story, too…one with happy parts…sad parts…and the kind of ending I’ve heard humans call “bittersweet.”

I came from a cattery way up north. The woman there was good to me, but the other Abys weren’t. They shunned me because I was little and sickly. Even my own mother took no notice of me. So I just sat there, wistfully watching the other kittens tumble and wrestle with each other and wondering what it would be like to really feel like I belonged somewhere.

Then I came here. Phoenix, a handsome Ruddy Aby, greeted me right away and started showing me around the house. He told me that I was beautiful – he was a very friendly up-front sort of cat – and that I should forget all about what the Abys back at the cattery had said. I was his girl now, and he’d take care of me. And he did. We did Kitty Tai Chi together…watched the birds outside the window together…snuggled under the spare-room quilt together….It was The Best.

A few trips to the vets’ and a lot of Clavamox later, I began putting on weight. My coat got glossier, too. Blue roan, they called my coloring. Very stylish, I thought.

I also got a new mom. Two new moms, actually. The first one was Star, an older Sealpoint Siamese. The second was Iris, a matronly blue-cream-tortoiseshell point Siamese. Iris was the gentler of the two; Star sometimes got annoyed for no reason and nipped or swatted me about the ears. But she was, on the whole, so much more loving than my real mom. I kinda overlooked those times.

And there was Phoebe, whom some of you have already met. She joined the household that winter, and we became best friends right away. We still are.

Yep, it was a whole different world than the one I’d been born into, and I purred myself silly about it. But I learned something about myself, too. I learned that I was really good at loving.
Loving means that you let your heart go around without a leash on. (Not that I’ve ever worn one, of course. But I’ve seen dogs on leashes at the vets’.) Your heart goes bounding up to someone, the way Phoenix came bounding up to me the night I arrived. You belong, without knowing how you belong. You just do. It’s an incredible feeling.

But loving someone can also hurt your heart, as I discovered when Iris died. Iris had always been plump for a Siamese: well, she began losing her appetite, and one day, she just wasn’t plump anymore. The Older Human kept bringing her to the vets and trying to feed her with this little plastic tube. Of course, we cats knew what our human and the vet didn’t: there was a cancer growing inside Iris. We could smell it. The other cats avoided her. But I stayed, remembering. I even slept next to her the night before she made her last trip to the vets’.

I missed Iris, but I still had Phoenix. And Phoebe. And Star.

About a year ago, Star’s kidneys began to go bad. The Older Human tweaked our diets, and she perked up. Oh, she snapped more often; and I’d always pull back, kinda hurt and puzzled. Then she’d start washing me again, loving as ever, and I’d settle back against her, blissfully forgiving and forgetting. It had, after all, been the illness talking, not my Mama Star.

But the illness grew stronger with time, and the flame inside her grew dimmer. One afternoon, the Older Human put Star into the carrier: I ran over and gently poked my paw through the door’s grille. Phoenix came over and washed the top of my head reassuringly. It’s just a check-up, he told me. She’ll be back.

And she was. I hopped right into that carrier before Star even had a chance to stretch a paw. We stayed there, nestled together for a long, long time.

She made her last trip to the vets’ a few weeks later. I was beside myself. I knew that Star lived on in spirit – we cats are very attuned to that – but I missed her physical presence. Because of my lonely kittenhood at the cattery, I had a greater craving for touch than the other cats did. I got mopey and wandered around the cattery, a little blue-roan ghost-cat.

My friend Sushi helped. Now, she isn’t the most socialized cat out there. She just kinda hangs our on her shelf in the cellar and eats. Doesn’t even play with the catnip toys that the Older Human brings her. We visit some, and she’s always glad to see me. But we don’t run races, play poke-paw, or do Kitty Tai Chi together.

Then, one night, she really surprised the whiskers off me. I jumped up on her shelf for a visit, and she began washing my head.

Something warm and glowing filled me, and I could feel a purr starting up in me again…burbling through me like the Older Human’s coffeepot. I turned about and leaned into Sushi’s blue-tortie fur. Just like I used to with Star. It wasn’t the same, but it was close. And at that moment, close was more than enough.

Phoebe’s human is T. J. Banks, the author of A Time for Shadows, Catsong, Souleiado, and Houdini, a novel for young adults which the late writer and activist Cleveland Amory enthusiastically branded “a winner.” Catsong, a collection of her best cat stories, was the winner of the 2007 Merial Human-Animal Bond Award. A Contributing Editor to laJoie, she has received writing awards from the Cat Writers’ Association (CWA), ByLine, and The Writing Self. Her writing has been widely anthologized, and she has worked as a columnist, a stringer for the Associated Press, and an instructor for the Writer’s Digest School. She is currently writing a blog called “Sketch People,” a  series of interviews with people who have stories worth telling. You can learn more about T.J. Banks on her blog, Sketch People.

If you love our site, please click on the image above to nominate us for
“Best Website About Cats”

13 Comments on Love, grief and letting your heart off the leash