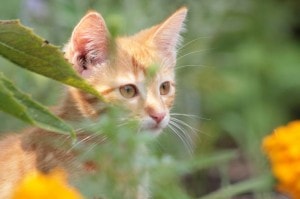 Feline asthma is a respiratory condition that involves inflammation and excess mucous build-up in the airways. Muscles spasms cause constriction of the airway, resulting in respiratory distress. Feline asthma shares some characteristics with asthma in humans, including symptoms.

Signs of feline asthma may be as mild as an occasional soft cough and/or a wheeze. At times it may seem as though your cat is trying unsuccessfully to bring up a hairball. In extreme and chronic cases, one might notice a persistent cough along with labored, open-mouth, harsh breathing. At this point, an asthma ‘attack’ could culminate in a life-threatening crisis.

Conventional medical treatment of feline asthma is based upon two main drug types: corticosteroids and bronchodilators.

Oral prednisone or prednisolone, and/or inhaled forms of corticosteroids are used to reduce the inflammation in the airways. Side effects of corticosteroids can include increased thirst and urination, increased appetite, weight gain, diabetes, lowered resistance to infection, and even behavioral changes.

Bronchodilators help open up the airways. Both oral and inhaled forms of bronchodilators are used. Side effects are generally minimal with bronchodilators, but these drugs should never be used alone, as that can actually worsen the condition. Several other drugs, such as antihistamines and anti-leukotrienes, are also used by some veterinarians.

Holistic therapies can help ease the symptoms of asthma. Success of these therapies will depend on the severity of the condition. Always consult with your cat’s veterinarian before starting any therapy. Not all veterinarians will be familiar with holistic approaches to treating asthma. You can you locate a holistic vet in your area through the American Holistic Veterinary Association.

If you suspect that your cat has asthma, always obtain a proper diagnosis from your veterinarian.

Has your cat been coughing or wheezing? This is an excellent video of what an asthma attack looks like: