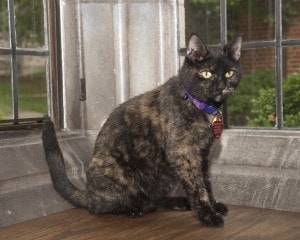 The story of Carmina the Cathedral Cat, the resident cat at Washington’s National Cathedral, captured my readers’ hearts when I first wrote about her in November of 2010. I thought her story should be shared with a wider audience, so I pitched it to Cat Fancy magazine a while back. Last week, my editor approved the story for the June issue of the magazine.

I got in touch with the media contact at the Cathedral to get updated information on Carmina. I didn’t expect the following e-mail:

We are saddened to tell you that the Cathedral Choral Society’s beautiful kitty, Carmina Chanté Schumann, was fatally struck by a car on Woodley Road on Tuesday evening, November 1, 2011. Witnesses reported that she was frightened by a dog and ran into the street.

Carmina has entertained everyone in the Cathedral Library since June 2010, when she was adopted from an animal shelter. She received special attention at the Cathedral’s Blessing of the Animals service that October. Although her principal caretakers were the Cathedral Choral Society staff, she had a great many friends around the close who will miss her. She is listed on our personnel roster as Morale Officer and she attended staff meetings regularly. Her most recent activities included gamboling behind the chain-link fence and bringing us presents she had captured along South Road. It is unlikely that her position will be filled.

When I wrote my original piece about Carmina, learning that she was allowed outside made me uneasy. While the cathedral grounds are massive, the cathedral is located along a busy city street. Even cathedral cats aren’t safe from the many threats of the great outdoors, especially not in a city environment.

Rest in piece, Carmina. To quote the Religion News Service, “may mice perpetual shine upon you.”