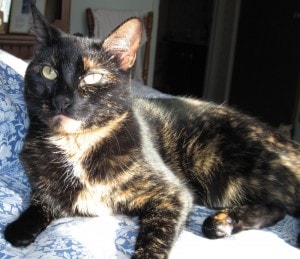 It’s been a busy couple of days here for us, and I’m a little bit exhausted. You see, I’ve been taking care of Mom for the last few days, with Ruby’s help, of course. I’m not sure what’s wrong with Mom, but she hasn’t been herself. She started sounding kind of funny on Sunday. Her voice just didn’t sound like Mom, it was all raspy and weird. She spent the rest of the day laying around on the sofa – very unlike her.

She fed us dinner, so that was a relief. But then she went right back to the sofa, and didn’t play with us like she usually does. That’s when I knew something was wrong. She told us she wasn’t feeling well, and went to bed right after she had her own dinner. She didn’t even brush our teeth, like she does every night. I got really worried. We’ve actually come to look forward to that, because we get treats afterwards!

Ruby was worried, too. We’d never seen Mom like that. We tried to come up with ways to help her feel better. Ruby said she’d jump up and down on top of her on the bed, that usually gets Mom laughing. When Mom just kind of groaned, I told Ruby to stop. Instead, I just sat and stared at her in the dark bedroom, hoping to be able to figure out what was going on. There was a box of tissues on the nightstand, so I played with those for a while. I half-heartedly shredded a couple of them, but it was no fun when Mom didn’t even tell me to stop.

I told Ruby that probably the best thing we could do was snuggle up with Mom, and send out our healing waves, the way cats have been doing for centuries. So we each wedged ourselves on either side of her, and Ruby and I went to sleep. I could tell Mom was restless. She tried to sleep, but her breathing sounded really weird. As a result, none of us slept well.

Very early in the morning, way before our usual wake up time, Mom got up and went into the kitchen. That was promising! Did our breakfast time get pushed back to an earlier hour? But no, Mom just made herself a cup of tea, and drank it in the living room. She didn’t even turn the lights on. Sitting in the dark in the middle of the night? How weird was that! Now I was getting really concerned. I was so worried, I actually jumped up on her lap and made biscuits – something I only rarely do. Ruby rubbed up against Mom’s legs.

Mom croaked something at us that neither one of us could understand, but we got that she thanked us for being there for her. Then she went back to bed again. She didnt’ wake up when it was time for our breakfast. We didn’t know what to do. We knew she wasn’t feeling well, but we were hungry! We paced up and down the bed a few times. I told Ruby to nip at her toes (I figured I’d let Ruby be the bad one!). Eventually, Mom got up and fed us our breakfast.

Finally! Everything was back to normal. But no – Mom went back to bed again! She stayed in bed for a long time and didn’t get up again until it was already light outside. I curled up with her again for a little while, while Ruby was half-heartedly playing in the living room with one of her toys. Nothing felt right. We don’t like it when Mom is not feeling well.

The only nice thing about this is that she hasn’t been spending a lot of time on the computer. She spent the last couple of days buried under a blanket on the sofa, alternately reading, sleeping and watching tv. One of us keeps her company at all times, and we have her undivided attention unless she’s making honking noises into a tissue. And let me tell you, that’s really weird!

I just hope things will be back to  normal again soon so Mom will play with us again, and brush our teeth before we go to bed, and breakfast is served on time. I don’t like it when Mom is sick!