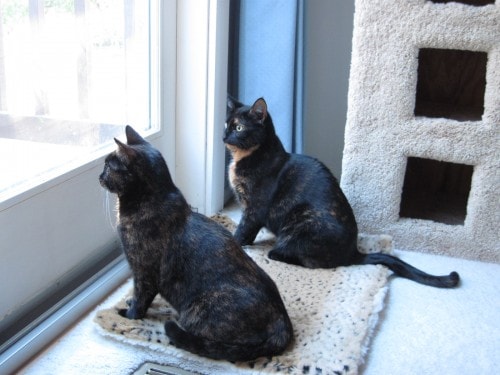 The last time my dad was here for a visit twelve years ago, he built a birdfeeder for me. I put it on my deck, right in front of the sliding glass doors, every November through March, and all of my cats have enjoyed the “kitty tv” it provides. Last year was Allegra’s first year with the birdfeeder, and this year, it’s Ruby’s. They’ve both been having a great time watching the birds, and occasional squirrel.

Squirrel visits to the deck have become rare since I use the Hot Meats birdseed, which is infused with hot pepper, and squirrels hate it. I still feed the squirrels at a second feeder that hangs from a tree in my backyard, but they were a little too hard on my deck railing over the years, chewing away at it whenever the feeder wasn’t refilled promptly. Every once in a while, they get some nuts on the deck – primarily for the girls’ entertainment!

Allegra and Ruby have been having a great time with the feeder so far. But why don’t I let them tell you in their own words.

Ruby: Allegra, what is Mom doing out there?

Allegra: She’s putting up a birdfeeder.

Allegra: It looks like a little house. Mom puts food in there for the birds. You’ll love it. The birds come and we can watch them – it’s way cool, because they’ll be really close to us! 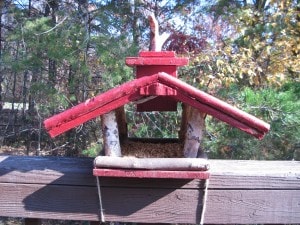 Ruby: Allegra, look! It’s a little red bird. It matches the color of the house’s roof!

Allegra: I see it, Ruby. Mom says the red birds are called Cardinals.

Ruby: Whatever. I want to eat it!

Allegra: Silly kitten. You can’t catch it. Just enjoy watching it. Trust me, you wouldn’t want to have to be out there and have to hunt your own breakfast and dinner.

Ruby: But wouldn’t it be fun, Allegra?

Allegra: Maybe once or twice. But I really prefer having my dinner in a bowl, all nice and ready to eat.

Ruby: I think he wants to play. Look, he’s putting his nose right up against the glass! I’m going to growl at him!

Allegra: Ooh Ruby – I think you scared him! Look at him take off. He’s fast! I don’t think we could catch him even if we were out there.

Ruby: What is that black thing? Is that a bird? It’s bigger than I am!

Allegra: I don’t know, Ruby – I’ve never seen a bird this big, and I’ve seen a lot of things in my life. I think we better get Mom.

What they saw were two big black crows that have been coming to the feeder ever since I put some stale walnuts out there. I think they keep hoping for more. Both of the girls were transfixed when these two big birds descended on the feeder.

Allegra: Aren’t you glad now that we’re inside, where it’s safe?

Ruby: I am. Mom would never let anything bad happen to us.

Ruby: This was exhausting. I need to take a nap now. I bet I can catch one of those big black birds in my dream.

I captured a very lazy Ruby watching a bird outside the window in this video. Do you think that she was imaginging what that birdie might taste like in the final frame?

7 Comments on Allegra, Ruby and the Birdfeeder