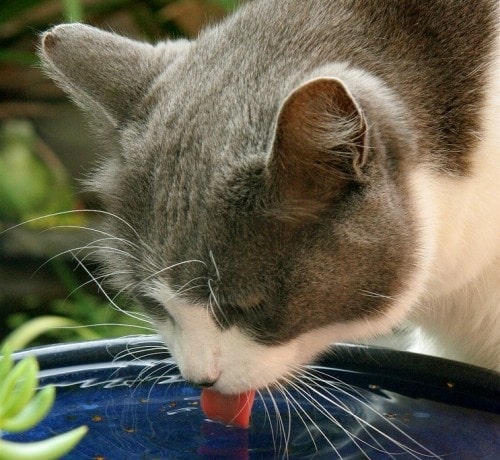 Ruby has a pretty elaborate ritual before she starts to take a drink of water. First, she sticks one paw into her water bowl and flings some water out of the bowl. Then she repeate the same thing with her other paw. Then she’ll lick her paws. It’s only after she’s apparently satisfied herself that yes, there is indeed water in her bowl (and after she has made a big mess all around her bowl!) that she will settle down and take a nice long drink of water.

Watching her go through this sequence again this morning made me wonder how many other cats have strange drinking habits. I’ve heard of cats who like to drink from a faucet, cats who prefer to drink from a cat fountain, cats who will only drink by dipping their paws in water and then licking their paws. Regardless of how cats drink, it’s important that they have fresh water available to them all the time.

Apparently, I’m not the only one who finds the topic of how cats drink fascinating. Last year, researches at MIT actually conducted a study into the physical dynamics of how cats drink. According to the researchers, the top surface of the cat’s tongue is the only surface to touch the liquid. Cats, unlike dogs, aren’t dipping their tongues into the liquid like ladles. Instead, the cat’s lapping mechanism is far more subtle and elegant. The smooth tip of the tongue barely brushes the surface of the liquid before the cat rapidly draws its tongue back up. As it does so, a column of liquid forms between the moving tongue and the liquid’s surface. The cat then closes its mouth, pinching off the top of the column for a nice drink, while keeping its chin dry. Click here to read the complete findings of the MIT study.

A brief health note: water is critical to keeping your cat healthy. While cats get moisture from a raw or canned diet, they should still have plenty of fresh water available at all times. Cats as a species don’t have a high thirst drive, and this can lead to chronic low-level dehydration if a cat is fed mostly dry food, which in turn, can lead to urinary tract and kidney problems.  “Water flowing through the urinary tract system is the most important factor in keeping your cat healthy,” says Dr. Lisa Pierson on her website, catinfo.org. “Cats on canned food have been shown to consume at least double the amount of water (from food and water bowl) when compared to a dry food-fed cat.” ( For more on why dry food is not a good choice for cats, please read The Truth About Dry Cat Food.)

58 Comments on How Cats Drink