I’m a big fan of Oreck vacuum cleaners. I don’t own one, but I seriously covet one. We had one at the veterinary practice I managed. It was used every day, multiple times a day, and it just kept on working. And it worked great, even on tough pet hair.

Why would you need an air purifier? From the Oreck website: “Did you know that every time you close your front door, you’re sealing yourself in with airborne dust and allergens? In fact, according to the EPA, the air inside your home may be up to 5 times more polluted than the air outside. And like Mother Nature, you have to move the air to clean the air. Oreck’s new air cleaner, The DualMax™ Air Purifier, has the power of a tower in a compact design to move and clean more air than ever before.”

The Oreck DualMax™ was super-easy to set up. No assembly required – which made me love this unit right away. You literally just take it out of the box and plug it in. Simply turn it on, and you’re on your way to cleaner air.

The unit has three different speeds. At the lowest speed, it’s so quiet you can barely hear it. My refrigerator hums louder than this air purifier. The second and third level of speed are noticeably louder, but not overwhelmingly so. The unit comes with a remote so you can adjust it from across the room.

The unit is recommended for medium rooms up to 200 sqare feet. It’s fairly compact.

One of the best features about this air purifier is the ease of use. There are no filters that need to be replaced.  It features a permanent Truman Cell®. Simply wash with soap and water, rinse clean and let dry. The odor filter is permanent as well (it doesn’t even come out of the unit) and does not require any maintenance. Now that’s my kind of appliance!

I don’t have any allergies to dust, pet hair or any other airborne allergens, so I can’t say that I noticed much of a difference in the quality of the room air for that.  I did notice that things were a little less dusty. What I really noticed, though, and what really impressed me, is the Oreck DualMax™’s high-efficiency odor absorber. I hate lingering cooking odors after I’ve enjoyed my meals, so I knew this was going to be my biggest test of whether I would like this air purifier.

It passed the odor test with flying colors. It would take only a few minutes of running the Oreck DualMax™ on its highest setting, and any remaining odors were gone. Litter box odors tend to not be an issue at our house, but I would expect that it would work equally well for that.

I loved almost everything about this air purifier, with one exception, and that exception is probably a very personal one. I’m super sensitive to smell, and I don’t care for the smell of ozone. Other people love that just after a storm clean smell – and that’s all it smells like. But if it’s a toss up between lingering cooking odors and the ozone smell, I’ll take the ozone smell. And as far as safety is concerned, according to Oreck, the DualMax™ complies with the California Environmental Protection Agency Air Resources Board Certification. To be certified, air cleaners must be tested for electrical safety and ozone emissions, and meet an ozone emission concentration limit of 0.050 parts per million.

How did Allegra and Ruby react to the Oreck DualMax™? Surprisingly, they didn’t react at all. I thought they’d be bothered by the moving air around the unit, or by the more noticeable noise at the higher speeds, but the only thing they found of interest about the air purifier was the box it came in. Additionally, Ruby thought that the Oreck DualMax™ was a welcome new addition to the available vertical space at our house. 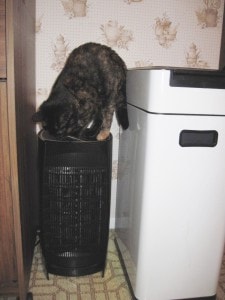 So, without further ado, here’s how you can enter to win an Oreck DualMax™ of your very own – a $400 value!

This giveaway is only open to residents of the U.S. contiguous 48 states. Oreck Corporation provided the prize for the giveaway but is not the sponsor of the giveaway. This giveaway ends Tuesday, November 22.