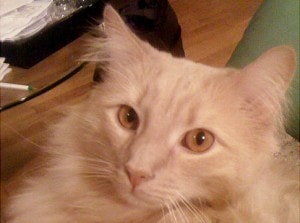 I just couldn’t wait until our weekly news round up to share this news with you: Jack the cat, who has been missing after escaping his crate in the American Airlines baggage area at JFK Airport eight weeks ago, has been found!

“American Airlines is happy to announce that Jack the Cat has been found safe and well at JFK airport. American’s team of airport employees have been focused on the search effort since Jack escaped on August 25, 2011. Jack was found in the customs room and was immediately taken by team members to a local veterinarian. The vet has advised that Jack is doing well at present,” a statement on the airline’s Facebook page read.

According to status updates on Jack’s Facebook page,Jack was scanned and the micro chip company (24hour pet watch) was the first to contact owner Karen Pescoe. Jack was found in American Airlines’ customs room, and was taken to an emergency vet in Queens. The vet reported to Karen that Jack is dehydrated and has lost a good amount of weight, though she said that all things considered, he wasn’t in bad shape.

Two of the members of Jack’s “on the ground” team in New York were able to visit Jack at the hospital and report that he looks tired and dirty, but that he’s bright-eyed. In a recent update on Jack’s Facebook page, it is reported that Jack is expected to stay at the hospital for 3-5 days. He has hepatic lipidosis, which can occur when a cat hasn’t eaten for more than a few days. He is on intravenous fluids and is being fed through a nasal tube. There is every reason to believe that Jack will make a full recovery.

According to the statement released by American Airlines, they will fly Jack to California to reunite him with his owner and his brother Barry as soon as Jack is well enough to travel.

Hours after Jack was lost, Karen’s sister started a Facebook page for Jack, which was shared by thousands of people. Jack’s disappearance generated major media attention. Just this past weekend, Jack’s friends organized Jack the Cat Awareness Day with the goal of informing the 37,000 employees at JFK Airport that Jack was still missing.

It appears that the awareness campaign has paid off. And according to Bonnie, one of Jacks’ New York friends, they “already got calls this morning for info and interviews about Jack from ABC News, 1010 WINS, NBC News, and MSNBC.”

Jack will surely make headline news again – but this time, for a happy reason. I can’t wait to see that first photo of Jack, reunited with Karen and Barry.

Update: As a result of the search for Jack, other cats were also found around JFK Airport. Unfortunately, the airport has a strict policy of not allowing any cats. These cats are now at a high-kill shelter in New York. If you, or someone you know, can help find these cats a home before their time runs out, please visit Jack’s Facebook page and scroll down, the available cats are listed, along with photos. Catster also listed links to these cats in an update posted earlier today.

15 Comments on Jack the cat has been found!