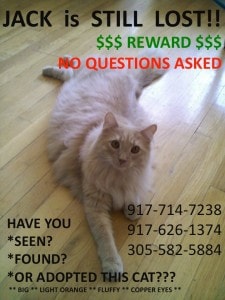 Whenever I hear about a missing cat, my heart hurts. I can’t imagine the anguish the cat’s humans are going through in these situations. The story of Jack, the cat who went missing when he was lost in the American Airlines baggage check area at JFK Airport in New York on August 25, 2011, was widely reported when Jack first went missing.

It’s been over 7 weeks. Jack is still missing. Jack’s owner and her family and friends garnered a lot of media coverage when Jack first went missing, but, as is the case with these situations, the coverage tends to wane after the initial flurry. However, since Jack still hasn’t been found, it’s important to keep this story in the news, and I’m hoping that this post can in some small way contribute to doing  just that.

On Saturday, Oct. 22, Jack the Cat Awareness Day will take place at JFK Airport, beginning at 4 p.m. Airline and airport employees as well as volunteers have been searching regularly for Jack in and around the airport. New volunteers are urgently needed to join the efforts by helping to hand out flyers and continue to spread the word about Jack. Volunteers can meet at the VetPort on Cargo Plaza Road, Building #189, Jamaica, NY 11430 at 4 p.m.

One of the lead searchers, Bonnie Folz, says, “You would be surprised at the amount of people at JFK that are not aware that Jack is missing. There are 37,000 employees, hundreds of buildings (occupied and vacant) and many places that Jack could be in the unrestricted and restricted/secure areas. This is why we need to reach as many employees as possible and why we need many volunteers to help us on Saturday. There are construction workers, shop workers, store workers, garage cleaners, garage security, terminal security and a whole lot more. Any one of them could be the one who sees Jack, but they need to know he is missing.”

Mary Beth Melchior is the sister of Jack’s owner, Karen Pascoe. Melchior began the Jack the Cat is Lost in AA Baggage at JFK Facebook page shortly after Jack was lost, when his owner was having difficulty reaching anyone in the American Airlines JFK baggage area. Jack’s page now has over 15,000 friends, but many live outside the New York City area and cannot be there to help with search and awareness efforts on the ground. Because awareness results in sightings and sightings find the missing pet, the success of this Awareness Day is a critical step in continuing the search for Jack.

New information on Jack’s story includes the public DOT Pet Incident Report released last week, on Oct. 13, 2011, that provides previously missing details. Jack’s owner Karen Pascoe, was making a move to California for a new job. She was traveling with Jack and her other cat Barry, and had secured them in their kennels per airline policies. Jack and Barry were kenneled and passed over to baggage handlers on American Airlines Flight 177. Until the release of the report, not even Jack’s owner knew precisely how he had been lost. The incident report reveals that “This incident occurred prior to the loading of the kennel(s) on the aircraft. The customer was traveling with two kennels containing one cat in each one. A clerk had placed one kennel on top of another on a baggage cart and the kennel on top fell and resulted in the cat escaping. The impact of the fall caused the kennel to separate and the cat escaped. The entire FIS area, where this occurred, was searched and efforts to immediately locate ‘Jack’ were unsuccessful.”

After receiving a call on her cell phone, Pascoe returned immediately to the area where Jack went missing. After walking around the baggage area and calling for Jack for over an hour, Ms. Pascoe was advised to take the last flight out of JFK prior to the airport closing for hurricane Irene, and that they would call her as soon as they found him. She got on that flight with Barry. It was not until Sunday, August 28, 66 hours after she was originally informed that Jack was missing, that Ms. Pascoe received a call from American Airlines. At that time, an American Airlines employee  called and said that yes, they were looking, but they had not yet been able to get humane traps. That person also informed Ms. Pascoe that “the last time this happened, it took about a month to find the cat.”

Jack is micro-chipped and his chip number is 0A106B4667 (registered with 24petwatch.com). More background on the series of events following Jack’s being lost can be found in the Notes section of the Jack The Cat is Lost in AA Baggage at JFK Facebook page.

“At this time, the goal is to spread the word. We ask everyone to please spread Jack’s story,” Ms. Melchior said recently on the Facebook page. “We don’t want to see anyone go through this ever again, but the airlines report that one animal in cargo is injured, lost or killed on average every 3 weeks (indeed, a cat was killed on Air France cargo 3 weeks after Jack was lost). In addition to keeping animals out of cargo, you never know who might know someone who knows something about where Jack is right now.”

Jack’s family and friends appreciate everything that volunteers continue to do to help in the search for the lost cat. Jack’s story has been featured in media outlets including The New York Times, but continued media attention is needed now to help searchers get the word out about Jack to all those working in and around JFK Airport.

Please share Jack’s story and share the great need for volunteers this coming Saturday, Oct. 22, to help with Jack the Cat Awareness Day.

12 Comments on Jack the cat still missing at JFK Airport