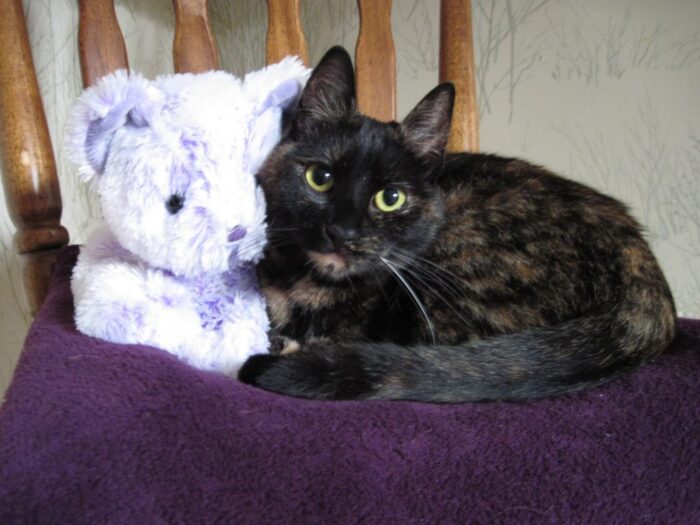 It’s been a while since I told you about one of my adventures, and I had a doozie last week. It all began with these new toys that started appearing in our basement a couple of weeks ago. They’re black, kind of ugly, with spindly legs, and they jump all over the place. They also make a really interesting noise. Mom says they’re called crickets.

Well, whatever they’re called, they’re awesome! Not only do they jump around on their own, they’re edible! Allegra and I have so much fun playing with them. And after we catch them, we eat them! How cool is that! We only eat their meaty bodies, though, we leave the legs for Mom to clean up. After all, she should have some fun, too! Interestingly enough, they only seem to be in the basement, so one day, I thought I’d surprise Mom, and I brought one upstairs. You’d think she would have been pleased! Oddly, she didn’t seem to appreciate that at all. Instead of effusive praise, all I got was an “oh, Ruby!” and a request to not do that again. Humans!

So I’m not all that used to finding live toys upstairs, but the other day I did. There was a very strange looking live toy crawling up the living room window. It was smaller than the cricket things, and sort of a brownish grey. It looked very interesting, so of course, I went over to investigate. That thing was no fun at all. It was so slow, it wasn’t much of a game to catch it. I thought maybe it would be a nice change from eating the crickets, so I took it in my mouth and bit down on it.

Oh my Cat!!! As soon as I bit down on it, I got this unbelievably vile taste in my mouth, and it burned! I jumped off the sofa, shook my head like crazy, and leaped around the room to get away from that awful taste, but it stayed in my mouth! Yuk yuk yuk!!!

Mom  noticed me acting all weird and tried to catch me, but I was so freaked out, I just kept running around and trying to get away from the awful taste. I batted at my mouth, too, but that didn’t help, either. Finally Mom managed to catch me, and as soon as she picked me up she said “oh you poor baby! You ate a stink bug!” How did she know? She hadn’t eaten it!

Mom put me back down. What? She wasn’t going to help me? But then she came right back, with a syringe in her hand. She picked me up again, and gently opened my mouth and squirted some water in it. I didn’t much like that, but it did make the awful taste go away.

Later that evening, my tummy felt weird, and I had to keep going to the litter box. That continued for the next few days. Not fun at all! I continued to play and purr for Mom and I even ate most of my meals, but I just didn’t feel quite right. I’d get a little better, then a little worse. On Friday, Mom gave me some medicine, and twelve hours later, my tummy was all better.

I think I’m going to be a little more careful about eating bugs from now on!

Ingrid’s note: Stink bugs are not poisonous, but they can cause irritation inside the mouth. I did notice some increased redness inside Ruby’s mouth that gradually receded after about two days. It is not known whether they cause gastro-intestinal upset, and the fact that Ruby’s diarrhea lasted for four days following the bug ingestion makes me think that it was only coincidence, and her upset tummy was caused by something unrelated. The “medicine” I gave her was a homeopathic remedy prescribed by my holistic feline veterinarian.

24 Comments on Ruby’s Reflections: Ruby and the Stink Bug