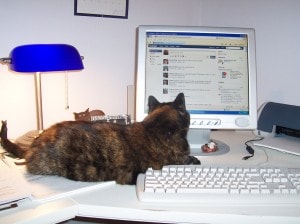 How do you feel about change? I have a love/hate relationship with it. I often think that one of the many reasons why I love cats is that they are creatures of habit who don’t like having their routines disrupted. I like my life, and I like my routines. At the same time, most, if not all, change in my life has always been for the better.

The reality is that, as the saying goes, the only constant in life is change. Ironically, most of us don’t spend a whole lot of time thinking about change, but we sure react to it.

This was brought home to me once again when Facebook made some changes to its news feed earlier this week. Users reacted to the changes with a level of emotion that, to me, seemed completely disproportionate to what had happened. I love Facebook. I love all the connections I’ve been able to make because of it, ranging from business relationships to online friendships to real life frienships. I don’t like it when I have to spend extra time to learn how to navigate around after they make a change, but I’m not going to get upset about it. It’s just Facebook being Facebook.

Watching the reactions to the Facebook changes made me think about how we react to change in a bigger context. And it made me wonder whether we could manage change better if we chose to embrace it consciously rather than dealing with it from a place of fear and worry. What if we approached change differently?

Become conscious of how you view change

Rather than automatically labeling change as “bad,” look for the opportunity in the situation. Sometimes, this can be impossible while you’re in the middle of a crisis, but it’s worthwhile to try and step back from what is happening and look at the big picture.

Many of the changes in my life that seemed very bad while I was going through them ultimately led to something really good. My divorce and the death of my mother within a four month period were incredibly hard to deal with, but at the same time, both events forced me to re-examine my life. This led to me quitting my soul-less corporate job and embarking on a career I loved.

Trust the process of change

This is where faith comes in. Regardless of your belief system or religious orientation, trust that changes in your life happen for a reason. You may not be able to see the reasons while you’re in the middle of change, but you’ll probably find a pattern as you look back over changes you’ve gone through in the past.

Get support from others

You don’t have to go it alone. Reach out to others who have gone through the type of change you’re dealing with. Allow family and friends to support you.

Asking for help can be difficult for some people. Bestselling author Nora Roberts once said “The answer is always ‘no’ if you don’t ask.” Getting support makes dealing with change easier – and don’t forget to pay it forward when someone else is having a hard time with change.

Embracing change was one of Buckley’s most profound lessons. She taught me to view change as something to embrace rather than something to be feared. Thanks to her, I began to develop trust in the universe, and I started to believe that no matter what, all was going to be okay.

How do you deal with change? Do you embrace it, or fear it?