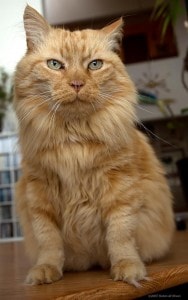 On Saturday night, Bob Dole, my dear friend Robin Olson’s beloved cat, died peacefully after a long battle with cancer. He was surrounded by those he loved.

Bob was Robin’s mother’s cat. When she died unexpectedly five years ago, Robin took Bob in, initially intending to find a good home for him, because she already had multiple cats of her own. Bob had not received regular veterinary care while he lived with her mother (a regular topic of dissension between Robin and her mother). When Robin took Bob to her vet, he was diagnosed as FIV positive and diabetic. His liver values were through the roof. He had severe dental disease. Robin was almost ready to throw up her hands and walk away, but, said Robin, ” it was Bob. I couldn’t do that to him. He was a sweet-hearted cat with an odd, bubbly purr and bright green eyes. Bob never asked to be left outdoors and fed inappropriate food or not get vet care. Somehow I would help improve his outlook.” And Bob went on to live another five happy years with Robin and her other cats. He was diagnosed with liver cancer earlier this year.

I never met Bob in purrson. I first met him, and by extension, Robin, online, when I came across an article Robin had written for the Feline Nutrition Education Society, titled What Bob Dole Taught Me About Raw Food. In the article, Robin describes her experience with raw feeding, how it put Bob’s diabetes into remission, and how the experience turned her into a raw food advocate. I had just begun investigating feeding raw to my own cats at the time. In a way, you could say Bob Dole inspired me to transition my own cats to a healthier diet. I’m sure I’m not the only cat parent who was inspired by Robin’s article – there’s no telling how many cats are on healthier diets now because of Bob, and Robin.

Bob also inspired one of my own articles, Making Medical Decisions for Your Cat. At the time, Bob had just been diagnosed with liver cancer, and Robin was writing about her struggle to make the right decisions for his care. I received a lot of positive feedback for this article. Once again, Bob inspired and helped other cats and their humans.

If it wasn’t for Bob, and the article Robin wrote about him, I might never have met Robin. Sure, I probably would have come across her fabulous blog, Covered in Cat Hair, eventually – but I like to think that Bob was responsible for “introducing us,” and for what has turned into a beautiful friendship.

When a special cat like Bob dies, he leaves a huge void for those who loved him. My heart goes out to Robin. I hope that knowing that Bob touched so many lives will provide some comfort as she mourns his passing and adjusts to live without Bob.

Rest in peace, sweet Bob. Your legacy lives on.

14 Comments on A tribute to Bob Dole