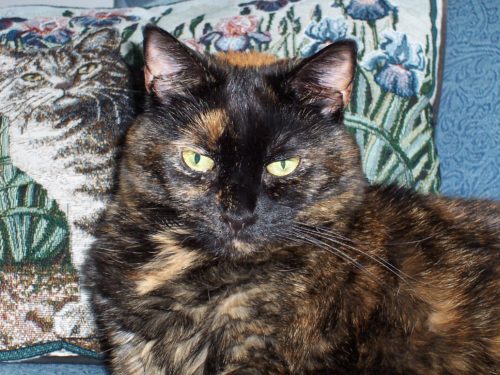 Making a decision about whether or when the time is right for euthanasia is one of the hardest things someone loving a pet will ever go through. Unlike human medicine, veterinary medicine is fortunate to be able to legally offer the option of gently ending suffering when there seems to be no hope for recovery. Making this decision for a beloved pet can be agonizing to the point of being nearly impossible for some pet guardians.

And even though there are some guidelines that can help with the decision process, ultimately, nobody else can make this decision for you. It’s between you, and your pet.

My personal experience with having to make the euthanasia decision

I’ve had to make this decision three times. In April of 2000, Feebee lost his battle with lymphoma. After tolerating chemotherapy well for almost seven months, he declined rapidly, and instead of choosing more aggressive chemotherapy and blood transfusions, which might have given him some more time, I choose to let him go. And Feebee, in one final act of unconditional love, took the decision out of my hands: he died in my arms while my vet was on her way to my house.

Those of you who read Buckley’s Story already know how difficult my decision was to let Buckley go in November of 2008, when her severe heart disease was compounded by multiple other problems. I probably held on a little too long with her, but I’m now at peace with my decision. She, too, died in my arms, with my vet’s gentle assistance.

My most difficult decision was the one I had to make last May, when Amber came down with a sudden, severe illness. She was in intensive care for four days, and her prognosis was so poor that I decided against pursuing more aggressive treatment and took her home. I spent the afternoon with her before my vet came to the house. Amber laid on my chest, and looked right into my eyes as she took her final, peaceful breath with my vet’s help. I’m still not entirely at peace with this decision, a part of me will always wonder whether I gave up too soon.

How do you decide when it’s time?

There are some markers that can be used as guides. Pain is one of them. No pet parent wants to see a beloved pet suffer. Animals, especially cats, are masters at masking pain, so this can be difficult to detect. Another marker is appetite. For most pet guardians, the first indication that something is wrong is usually when a pet stops eating. A third important marker is dignity. Is the pet still able to relieve herself on her own, or does she need assistance with urination and defecation?

Dr. Alice Villalobos, founder of Pawspice, a hospice program for pets, has developed a Feline Quality of Life Scale that can help care givers determine quality of life based on criteria such as pain, appetite, hygiene, and whether the number of good days outweighs the bad.

Each relationship is unique

But decision points aren’t the only part of the equation. Each pet and each relationship between human and animal is unique.  There is no one right answer. And that’s why making this decision can make you feel like you’re all alone with this awful responsibility.

The emotional aspects of making the euthanasia decision can be incredibly complex. In addition to the love for the pet, and the fear of losing him and not being able to imagine life without him, a care giver’s prior experience with illness and death, be it of a pet or a human, will influence the decision. Religious beliefs may also impact the decision.

Denial can play a significant role in the process. When faced with difficult situations, denial is a natural defense mechanism that initially saves the person from anxiety or pain. However, getting stuck in denial can become paralyzing. When it comes to dealing with a terminally ill pet, love and denial can be intricately linked, and it can sometimes be difficult to separate one from the other.

Making the euthanasia decision is a lonely decision. While others may provide support and advice, ultimately, nobody other than the pet’s caregiver can make this decision. And that’s where things get challenging. I’m currently dealing with a situation where a client’s cat has been ill for a long time, but the client is not ready to make a decision. She’s gone far past the stage where I would have made the decision, if the cat was mine. But at the same time, I can’t fault this client for not being able to make a decision: her cat, while medically in very bad shape, still responds to her, still purrs for her, and still eats well.

Sometimes, it can be hard for a caregiver to really see how far an animal may have declined. Watching a pet deteriorate a little more every day is hard, but seeing the decline happen a little bit at a time can feed the natural amount of denial most people have that the pet just isn’t that sick. Sometimes, it takes a visit from someone who hasn’t seen the pet in a while to make the pet’s guardian realize just how much the pet has declined.

One aspect to making the decision that is not often talked about was recently addressed in a beautiful post by Robin Olson of Covered in Cat Hair. Robin’s 14-year-old cat Bob has lymphoma, and has recently stopped responding to chemotherapy. He’s also dealing with multiple other problems. Robin writes:  “Try to watch out for the urge to just get it over with because YOU are suffering watching this natural process occur. This is very very difficult, but we owe it to our animals to give them every option and every day we can.” I couldn’t agree more. We don’t want our animals to suffer, that’s a given. But the euthanasia decision should never be based on our own discomfort with the dying process. I encourage you to read Robin’s entire post about Bob’s battle with cancer, and her struggle to do the right thing for him.

Will you “just know?”

It is often said that we will “just know” when the time is right. And I believe that when we do connect with the essence of our animals and manage to set aside worry and fear for even just a few moments at a time, we will know.  It takes courage to set aside our fears, and to tune in to the animal and really “hear”  them.

Ultimately, the only way any of us can make this decision is by listening to our animal friends with our hearts, not with our heads. It becomes a decision of love, not something to be reasoned out on an analytical and intellectual level.

The sad reality of making the euthanasia decision is that there is probably no way to ever be completely at peace with it. And that, too, makes it the loneliest decision.

Have you had to make the euthanasia decision for a beloved cat? What helped you during the decision process?

173 Comments on Euthanasia: The Loneliest Decision