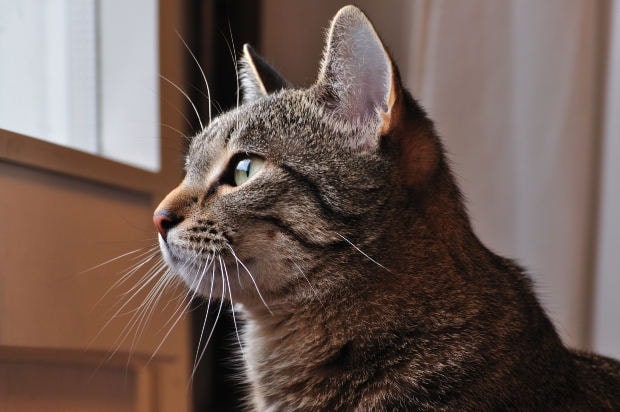 It happened 26 years ago, but my memory of the incident remains vivid.

With my sights set on becoming a veterinarian, I was working as a volunteer at a local veterinarian’s office in Gainesville, Florida, to obtain that all-important “real life” experience. It was a weekday, and the first appointment of the afternoon was a woman who was bringing in her cat, Sarah, for a physical examination. “She has no interest in food, no interest in people; she just sits next to the couch and doesn’t move”, said the owner, a woman in her 50s. This subdued behavior had been going on for four days. The doctor asked the woman about the days preceding Sarah’s lethargy and loss of appetite, and whether anything in the cat’s environment had changed.

In a soft, forlorn voice, the woman proceeded to tell the veterinarian that Sarah had a littermate – a sister – and that they were inseparable. Both cats had access to a small backyard through a kitty door, and would often hang out in the yard together. Four days prior, the sister was in the yard by herself when a neighborhood dog managed to get into the yard, chase down the sister, and attack and kill her. Sarah was inside the house at the time, looking into the yard from the window. She witnessed the entire incident. “From that point on”, said the woman, “she’s been like this”, pointing to Sarah. I looked over at the cat, huddled on the exam table, disinterested in her surroundings, inconsolable.

The veterinarian examined her from head to tail. A “use caution” sticker on Sarah’s record indicated that she was known to be feisty during veterinary exams. But not that day. She put up no fuss as the doctor poked and prodded. The doctor pronounced the cat healthy, and told the client that in his professional opinion, Sarah was clearly grieving for her sister. “I wouldn’t have thought cats were capable of mourning”, said her owner, “but I see it now with my own eyes. I’ve never seen anything so sad in my life.”

Grief occurs as a result of the abrupt or unexpected severing of attachment. Although cats are thought of as being aloof and solitary, they are, in fact, social animals, and are as capable as dogs of forming deep attachments to people and other animals. It stands to reason that a severing of that attachment would lead to grieving. As a veterinarian and advice columnist, I am often asked whether I think cats grieve or mourn the loss of a feline companion. I certainly feel that they do, but cats cannot speak, and we can only guess at what their true emotions might be at any given time.

“Culturally, we try to deny human-like behaviors in animals,” says Alan Beck, Professor and Director of the Center for the Human-Animal Bond at Purdue University’s School of Veterinary Medicine. “People used to believe that animals didn’t feel pain”, says Beck. “We know, of course, that this isn’t true. Then, they used to question whether animals could think. Clearly, they can.” Beck adds, “I suppose that denying animal’s human-like behaviors allows us to be more comfortable eating them and using them.” But attitudes toward animals have changed over the years. While he believes that cats probably don’t perceive death the same way as people do, for pet cats experiencing a drastic change in their environment, it seems reasonable to think that they do grieve. “We can’t be certain if they mourn in the human sense of the word, but we should give them the benefit of the doubt”, says Beck. “If something would cause stress in a human, we should assume it would cause stress in animals.”

The difference between human and feline grieving

There are clear differences between human and feline grieving. Humans can show grief for distant relatives or for public figures. Cats lack the abstraction that allows people to grieve for those they’ve never met; cats only grieve for familiar and close companions. Cats do not demonstrate the same ritualized ways of dealing with their grief as humans do, but they do exhibit their own signs of mourning. In 1996, The American Society for the Prevention of Cruelty to Animals conducted the Companion Animal Mourning Project. The study found that 46% of cats ate less than usual after the death of a companion cat. Around 70% showed a change in vocalization pattern (they meowed significantly more often, or significantly less, than normal). More than half of the cats became more affectionate and “clingy” with their owners, and many of the cats slept more, and changed the location of where they usually slept. Overall, 65% of cats exhibited four or more behavior changes after losing a pet companion.

Alison Fraser needs no convincing. When not singing or dancing on Broadway, the Tony-nominated performer could usually be found doting on her cats, Iggy and Pete. This past August, however, tragedy struck when Iggy, who had been coping well with his heart disease (hypertrophic cardiomyopathy), suffered an embolus and became acutely paralyzed in his rear legs. He died soon afterward. “Pete mourned for days”, says Alison.

This wasn’t the first time Pete had shown mourning behavior. When Alison’s husband Rusty became ill, Pete got very stressed and began to overgroom, barbering his tail nearly to the point of baldness. When Rusty passed away, Pete mourned for weeks. Not long afterward, Pete’s other feline companion, Valentine, died of chronic renal failure, and once again, Pete grieved for weeks, moping, hiding, and overgrooming. Alison adopted Iggy as a companion for the sullen Pete. Fortunately, Iggy and Pete clicked right away, with Pete acting as Iggy’s protector. “Iggy died so suddenly”, says Alison, “that Pete never got to say a proper goodbye.” Until Alison came home with Iggy’s ashes. “When I brought the ashes home, I placed the urn in the middle of the living room floor. Pete went over to the urn, laid his chin on it, and kept it there for an hour. I believe this was Pete’s way of saying his final goodbye.”

The question often arises as to whether it is a good idea to allow surviving cats to see the body of the deceased cat. “Whether this is helpful or not is the subject of debate”, says Dr. Nicholas Dodman, board certified veterinary behaviorist at the Cummings School of Veterinary Medicine at Tufts University, and author of The Cat Who Cried for Help, “and there is little evidence to support either view.”

Some researchers believe that a cat perceives death the way a young child might perceive it, i.e. they lack the concept of death being a permanent state. If that’s true, then showing them the body “would be like letting a 2 year-old see a deceased family member at a funeral. The consequences just don’t register”, says Dr. Dodman. On the other hand, if dogs and cats do comprehend death more than we give them credit for, viewing a deceased companion may help to explain why that companion cat won’t be around in the future. Anecdotally, people have reported that some cats stop searching for an absent companion after being shown the body of a deceased companion.

This may indicate that cats have at least some comprehension that something dead cannot come alive again. This may be linked to the fact that they are predators. “The weight of opinion today is that a ‘viewing’ is not likely to help a pet understand the death of a companion”, says Dodman. “But”, he adds, “I think we should give our pets the benefit of the doubt and allow them to, if we feel it might help. After all, if the human experience is anything to go by, it may help some come to terms with what has transpired.”

How to tell whether your cat is grieving

Life abruptly becomes very different for the surviving cat, and it will require extra attention, compassion, and reassurance during this period. If the surviving cat had access to the outdoors, this should be restricted, as the cat may stray off into unfamiliar territory and get into dangerous situations as it searches for the lost companion. Time heals all wounds, and if the cat is showing other signs of depression (poor appetite, change in sleeping pattern, excessive vocalization, overgrooming, pacing, searching), these often dissipate after a few weeks, although it can take as long as six months. “Enriching the environment, by offering new toys, treats, etc. is helpful and recommended”, says Dr. Dodman, as this may help reduce a clingy cat’s sudden over-attachment, and may draw the cat out of its shell.

In a multi-cat household, the surviving cats will eventually work out the new social order. Whether getting a replacement cat right away is a good idea is debatable. Pete found Iggy to be a welcome distraction, but this is usually the exception rather than the rule. A cat in the throes of grief may not be able to handle the additional stress of a new feline intruder. “In some instances, severely affected cats may require anti-anxiety or anti-depressant medication”, warns Dodman. As with humans, cats need time to process the loss.

Cats are resilient animals. If given time to grieve, they will return to some of their old rituals, develop new rituals, and once again regain the contentment that they previously enjoyed.

Dr. Arnold Plotnick is a retired feline veterinarian and the former owner of Manhattan Cat Specialists, a cats-only veterinary clinic on the Upper Westside of Manhattan.

92 Comments on Do Cats Grieve for Other Cats?