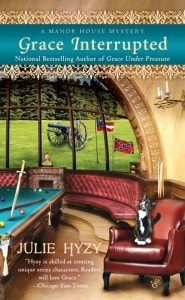 I first came to know Julie Hyzy through her White House Chef Mystery Series featuring the immensely likeable Olivia (Ollie) Paras. I thoroughly enjoyed all four books in the series, but there’s not a single cat in any of them. Neither was there a cat in Grace Under Pressure, the first in Hyzy’s Manor House Mystery Series, although that, too, was a delightful read. When I saw the cover of Grace Interrupted, the second in the series, I was thrilled to see the adorable little kitten on the cover.

If I hadn’t alrady liked Julie Hyzy, I would have become a fan for sure after reading the dedication for Grace Interrupted: “For anyone who has ever opened heart and home to a stray.” It turns out that Bootsie, as the kitten is named in the book, is modeled after Julie’s newest family member.

The book’s cover is actually one of the most descriptive covers I’ve seen in a while, as it covers all elements of the story: the kitten, the elegant manor setting, and Civil War re-enactments.

Civil war re-enactors have set up camp on the grounds of Marshfield Manor. The group is very believable, especially when the unrest spills out of the barracks and inside the sumptuous mansion. Grace manages to settle a minor squabble, but loses the war when actor Zachary Kincade is found stabbed to death.

Jack Embers, the groundskeeper, falls under suspicion when he’s linked to the death of Zachary’s brother years ago. But there were others out for Zachary, actors who can be very convincing when the coveted role of “General” is on the line. Grace feels responsible for finding the murderer…and for the sweet tuxedo kitten found on her doorstep, Bootsie. Can she come to the rescue of her friends without putting herself in danger’s way?

This is an all-around wonderful cozy mystery, filled with likeable, well-developed characters. The setting is fascinating. I’m not a Civil War buff, but I enjoyed learning about what motivates re-enactors. And of course, there’s Bootsie, the tuxedo kitten that Grace takes in on a rainy night, fully intending to find it’s rightful owner, which added to my enjoyment of this book.

Treat yourself to this well-plotted, entertaining and thorougly engrossing mystery – you won’t be disappointed.

Julie Hyzy is the national bestselling author of the White House Chef Mysteries and the Manor House Mysteries. She won the Barry and Anthony Awards for Best Paperback Original for State of the Onion in 2009, and several other awards for her novels and short stories. Her first Manor House Mystery, Grace Under Pressure, earned a Starred Review from Publishers Weekly. Julie loves to read, eat out, and watch old movies and TV shows with her husband and three daughters. They live near Chicago with two rambunctious cats, Kitka and Violet. For more information about Julie, please visit her website. Kitka, of course, was the inspiration for Bootsie. And isn’t she a cutie?

I purchased this book.

Thank you for nominating us for two Petties.
We need your help to win – please vote every day!