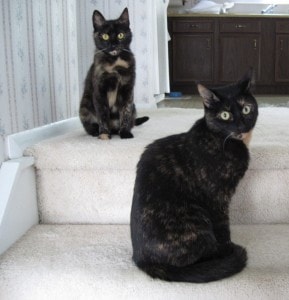 That’s the thing with magic: you’ve got to know it’s still here,
all around us, or it just stays invisible for us. – Charles de Lint

Moments of magic happen every day if we allow ourselves to let them become visible. And they don’t have to be big, splashy moments, either. A perfect cup of coffee, first thing in the morning, can be magic. A walk in the park at sunset. An unexpected meeting with a friend. There’s a quiet joy in these moments of magic.

I had a very special moment of magic last week. The fact that it happened on my birthday made it even more special. I was reading, and Ruby was sleeping on my lap. All of a sudden, Allegra decided to join us. Now mind you, the two girls get along beautifully, but so far, there had been a limit as to how close to each other they were willing to get. But in that moment, Allegra jumped up on my lap, and settled down right next to Ruby. Ruby barely opened her eyes. Allegra started grooming herself, and gave one of Ruby’s paws a quick lick before curling up for a nap of her own. There they were, my two girls, on my lap, right next to each other! It only lasted a few moments, a noise outside distracted Allegra and she got up to check it out. But while it lasted, it was pure magic.

I didn’t have my camera nearby to capture my magic moment, but I thought you’d enjoy this shot of the two girls together from the other day. It, too, qualifies as a magic moment: a photo with both of them looking at the camera at the same time!

What magic moments have you experienced lately?