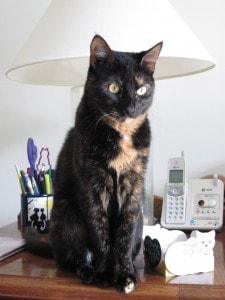 I can’t believe I now have to compete with my sister Ruby for time to write on here!  Maybe I need to get my own catputer!

Even though I wasn’t sure at first what it was going to be like having a sister, and having to share Mom with her, I have to say that I really like having her here. She’s lots of fun to play with. I especially enjoy bopping her on the head.

Our favorite game is chasing each other, and I always win. Her little legs aren’t as fast as my long ones, but I pretend to let her win every once in a while so she doesn’t feel bad. That’s what big sisters do. Of course, she’s got a way to get me back for winning, and I haven’t figured out how to stop her from doing it. The little stinker vaults right over top of me! Sometimes, she does it when she’s on a mission to somewhere (don’t even ask what she’s so busy running around for, half the time, I think she forgets where she was going before she gets there!). Other times, she does it when we stalk each other. All of a sudden, it’s like she’s coming out of nowhere and there she is, jumping right over me! The nerve!

I have to say, though, she can be a little annoying when it comes to meal time. As soon as Mom goes into the kitchen, Ruby races in there after Mom and starts to scream her little head off! I know Mom always gets our meals ready as fast as she can, but it’s never fast enough for Ruby. The racket she makes! It hurts my poor  ears. Do they make ear plugs for cats? I’ve learned to just sit at a slight distance and watch her make a fool out of herself. Hasn’t she figured out yet that there’s always going to be enough food for both of us, and that it’s always served to us on time? And she’s not polite at all about waiting for Mom to put the dish down, she practically leaps at the dish before Mom even has a chance to put it on the floor. I’ve learned to accept that I get my dish second. I’m the big sister, so I guess I have to be okay with it.

Unfortunately, I’ve had to learn to eat faster than I used to. Ruby inhales her food, she’s just too immature to understand that savoring your meal is one of the great pleasures of a cat’s life. The first few days she was here, when she was done, she’d march right over to my dish, while I was still eating, mind you, and stick her head right underneath mine and start to eat my food! I was so fed up (hm – poor choice of words, because actually, I wasn’t full yet!). Anyway, I just walked away in disgust. Mom grabbed Ruby and held her so I could finish my dinner, but that wasn’t fun for anyone. So now I just eat fast.

We both sleep with Mom at night, and I really like that.  Ruby is respectful of my space, so we can both be snuggled up on opposite sides of Mom. It’s almost the best part of our day.

That’s all for today. I think I’ll go wake up my sister so we can play.