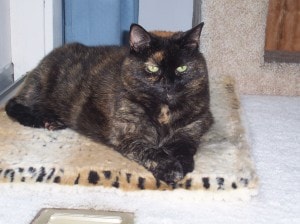 A year ago today, I had to say good-bye to Amber after a very sudden, brief illness. I was devastated. Nothing ever prepares you for unexpected loss. In hindsight, I’m grateful that she got to spend her final few hours at home with me, and that she died peacefully in my arms. At the time, those things did not bring much comfort.

A year later, the pain of losing her has dulled a little, but I still miss my beautiful girl every day. She was in my life for ten years, and they were some of the best of my life so far.

My love for Amber grew slowly. Unlike all of my other cats, it was not love at first sight with her. I had lost my first cat, Feebee, to his battle with lymphoma in April of 2000. He had been with me for almost sixteen years. I didn’t think it was possible to hurt as much as I did after he died. I had had other (human) losses in my life before, but nothing was as painful as losing him. There were days when I wasn’t sure I’d make it through.

What saved me during those dark days was my work at the animal hospital, my office cat Virginia, and the daily contact with all the feline patients we saw every day. But coming home to an empty house night after night was becoming increasingly difficult.

A few weeks after Feebee died, Amber and her five kittens were brought to the animal hospital by a client who had found the little family in her barn.  Despite being emaciated and scrawny-looking, Amber’s eventual beauty was evident even then.  She was a dark tortoiseshell color, with an amber-colored heart-shaped spot on top of her head, which became the reason for her name.  Her kittens found new homes in fairly rapid succession.

However, nobody was interested in the beautiful mommy cat.  She spent her days in the big adoption cage in the hospital’s waiting area, but with the constant inflow of homeless kittens that is typical for spring and summer, nobody wanted to adopt an adult cat.

One weekend in July, I decided to take Amber home, “just for the weekend”.  I thought it would be a good way to try and see what it would feel like to me to have a cat who wasn’t Feebee at my house. I also wanted to give her a break from the abandoned feral kitten we had placed with her after her own kittens had all found homes.  The kitten was a rambunctious six-week old grey tabby, and Amber was becoming increasingly exasperated with his constant need for attention.  As far as she was concerned, she had done her mommy duty with her own kittens.

After living in a cage for all these months, Amber was initially a little overwhelmed by having access to an entire house, and she spent most of that first weekend near or under my bed.  By Sunday evening, she had relaxed a little and started exploring her new environment.  I liked having her gentle and peaceful energy around the house, and I decided that she could stay a little longer.

The wound from Feebee’s passing was still raw. I wasn’t quite ready to acknowledge that she was home with me to stay, so I told everyone that I was “just fostering her”. I had flyers all ready to go to advertise that she was available for adoption. Remember flyers? This was in the dark days before social media!

My love for her grew over the years in ways that I never would have thought possible. She was my heart and soul. She reflected back to me the limitless possibilities my life could hold if I opened my heart and allowed things to unfold. She was my inspiration for so many things, including this site. She was the original Conscious Cat.

There are so many things I miss about her: the way she would curl up in my arms each night and sleep there for most of the night. The way she’d purr if you so much as looked at her. The way her tail would twitch when she got excited about something. I miss her gentle presence and peaceful energy.

Allegra came to live with us about five weeks before Amber died, and she was a great comfort to me during this past year. Her joyful, kittenish presence and her quiet love helped my heart heal. Now that Ruby has joined our family, my heart, and my life, are expanding once again.

And Amber’s gentle spirit and eternal love are never far from me.

26 Comments on In loving memory of Amber, one year later