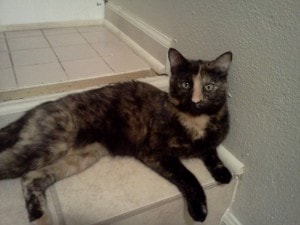 It’s no secret that I love torties. From my first office cat Virginia, to Amber, Buckley, Allegra and Ruby, there’s just something about these cats’  particular coloring, and their unique personalities, that has always appealed to me.

Tortoiseshell cats are named for their coat color, which is a mottled or brindled combination of brown, black, tan, gold, orange, and sometimes cream and blue. Those of us who fancy torties know that they have unique personalities, often referred to as “tortitude.”

Given all that, it’s no wonder that I was excited when I came across one of these rare male torties.

Doodlebug belongs to Sharon, one of our readers. He is 16 months old and is the son of Sharon’s other tortie, Callie. The fact that he was a he came as quite a surprise to Sharon. She actually called him Chloe for the first couple of months of his life, and she was caught rather off guard when she took him for his first vet visit. I asked what the vet’s reaction was when he realized that he had one of these rare male torties as a patient. “He was actually pretty matter of fact,” reports Sharon. “He told me that he would change the gender notation in the record, and that I might want to find another name.”

Male torties are believed to be sterile. Doodlebug is currently unneutered, but, says Sharon, “that will change the first time he sprays something.” He’s an indoor cat with limited access to an enclosed yard, and her other three cats are spayed. Doodlebug has shown no interest in roaming, spraying, or mounting the other cats. The vet has given him a clean bill of health.

As for tortitude, Doodlebug appears to be more laid back than the average tortie. He is very mellow, and likes to spend hours drowsing next to Sharon while she is on the computer or watching tv. He can be a bit possessive when one of the other cats takes over “his” side of the chair, but he’s very gentle about nudging them out of his territory. Eating is another favorite past time. In addition to his regular diet of dry cat food, he enjoys sampling the regional cuisine, including fried catfish and crawfish. He also loves chicken and sausage gumbo and will happily eat even the okra in it.

Because of their genetic rarity, some people mistakenly believe that male tortoiseshell cats are worth a lot of money. In reality, they’re only worth as much as any other cat who is loved and valued by their owners, and as we all know, there is no price tag on love.

Doodlebug is unaware of his newfound fame and remains unavailable for comment.