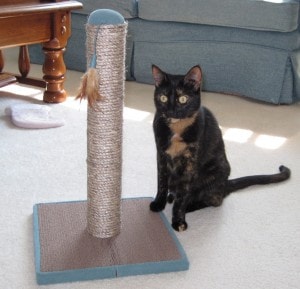 When the big box of products from SmartyKat® arrived, it was like kitty Christmas in April at our house. My little product tester was ready and eager to get started!

The SmartyKat® CompleteNeeds® system is designed to meet cats’ unique needs when it comes to playing, hunting, scratching, interaction, privacy, independence, and more.  From scratching posts to kitty hammocks to litter box accessories, SmartyKat® offers a dizzying array of products. 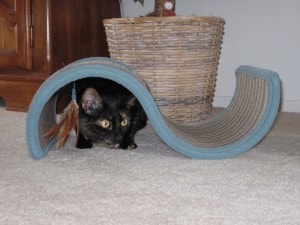 The ScratchScroll™ is a well-designed, sturdy wave scratcher, covered in a mix of different scratching surfaces including a couple of different texture carpets and sisal. Allegra was more enamored with the space underneath the scratcher and the little feather snap in toy than the actual scratcher. The feather toy snaps out easily, but not to easily that she could rip it out herself, and can be exchanged with several other toys in the SmartyKat® line.

The SisalColumn™ is a well-made scratcher. The base is pretty sturdy, and Allegra loves vertical scratchers, so she took to it almost the minute I had it assembled. It is probably better for smaller cats, even at a mere 8 pounds, Allegra managed to make the base move just a bit when she used it, so it might topple over with bigger cats. 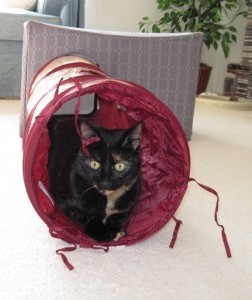 The HammockHouse™ was the biggest hit. I was a little worried when I realized that there was “some assembly required” – words that usually instill fear in my heart. However, the HammockHouse™ came with instructions and diagrams that actually made sense, and I had it assembled in less than a minute. The frame is sturdy even though the actual house is lightweight. Allegra loved leaping in and out of the two entrances. She hasn’t used the hammock part. I was curious whether it would hold even a big cat without collapsing the house, so I used an 18-pound bag of cat litter to test it, and the house passed this test easily.  This product is listed in the privacy section, and Allegra gives it her wholehearted approval for just that. She’s afaid of thunderstorms and usually hides out in our downstairs bathroom behind the shower curtain during storms. The first time we had a storm after the HammockHouse™ arrived, she was curled up inside it.

Allegra is a big fan of kitty tunnels, so the CrackleChute™ was an instant hit. The chute is designed to be connected to the HammockHouse™, which made it even more fun.

Here’s a video of Allegra with the HammockHouse™ and CrackleChute™:

I could barely get the LoofaLeap™ wand toy off of its cardboard backing before Allegra went wild. The combination of different textures and the  movement created by wiggling the wand proved to be irresistible. As the human on the other end of the wand, I would have preferred it to be a bit longer, but I’m a quick learner and after the first few tries, my hand was no longer part of the game. A truly interactive game!

All of the products are well-made and should stand up to even multiple cats for quite some time. They’re also pretty to look at. I’ve always felt that there’s no reason that cat toys have to be ugly, and the SmartyKat® folks seem to share this view. 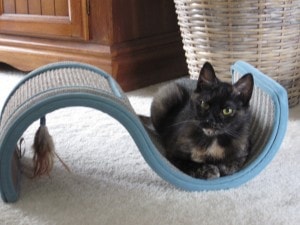 Ruby wasn’t part of our family when I wrote this review, but she has since given four paws up to the LoofaLeap™ wand toy and the CrackleChute™. She also thinks that the The ScratchScroll™showcases her cuteness perfectly. She’s less thrilled with the The HammockHouse™ – mostly, because Allegra likes to hide in it and then pounce on an unsuspecting Ruby when she walks by, just minding her own business.

For more information on the entire SmartyKat® line and where to purchase, please visit their website.

You  may also enjoy reading:

2 Comments on SmartyKat products: a bonanza of kitty fun