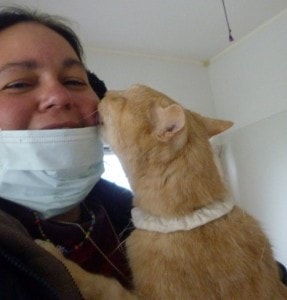 Thre weeks have passed since the 9.0 magnitude earthquake and tsunami struck Japan, which was then followed by the crisis at the Fukushima Daiichi nuclear power plant in northern Japan. As recovery efforts in the affected areas continue, radiation has contaminated water and soil in Japan, and possibly beyond. This is a developing story, and there are still more questions than answers as to the environmental impact of the crisis.

In the meantime, animal rescue groups are on the ground in Japan, trying to rescue as many animals as they can. One of the biggest challenges rescuers are facing is re-uniting pets with their owners. As The Cat’s Meow blog reports, most shelters don’t allow pets, and pet owners were often faced with making a horrible choice between evacuating and leaving their pets behind, or staying in unsafe homes.

“This is a big calamity for pets, along with people,” said Sugano Hoso of the Japan branch of the U.S.-based United Kennel Club. “Many are on their own, and many more are trapped in evacuated areas where people have left.”

Tamae Morino brought her Persian-mix cat, Lady, to Fukushima city’s main shelter , but Lady is forced to stay outside. Like many of the animal victims of the earthquake and tsunami, Lady is frightened and agitated, and it’s been difficult for her to cope with the sudden change in environment.

“She got sick, and is still very nervous,” Morino said. “She is an important part of our family. But they don’t allow pets into the shelter, so she has to sleep alone in the car. She seems very lonely. We are happy to have her with us, though. So many cats just vanished.”

Thanks to the dedicated work of volunteers from rescue groups in Japan and from around the world, there are a few happy stories in the midst of all this devastation. Japan Earthquake Animal Rescue and Support posts daily updates of their rescue efforts, chronicling both challenges and successes, on their Facebook page.  You can also follow them on Twitter.

The American Veterinary Medical Association (AVMA) posted a comprehensive FAQ for pet owners about the earthquake in Japan on their website.

And what about the cats and people on Cat Island? Conscious Cat reader Paula has been in touch with several people in Japan, and based on what she’s hearing, the cats and people on the island are okay. According to an e-mail Paula received from a Japanese journalist, the damage in Tashiro was not as big as it was in other parts of Honshu. They had a 16 to 20 foot high wave, and the buildings closest to the port were destroyed. Sadly, some cats near the port were killed, but the rest are fine and are being taken care of by people, just like before the quake. According to the journalist, the Japanese defense forces and the US military have been flying food and supplies, including cat food, to the island.

The following video shows a Japanese woman who was reunited with her cat a few days after the quake:

Conscious Cat reader Paula provided the following translation: “She says that it’s the first time she came where her house was, then she says that she kept a cat. Then she says that she went there when the tsunami hit and she looked for it but couldn’t find it, so she just ran as she stood. Then when they go inside, she explains where the dining room was and then she hears meowing!!! And she says “the cat, it survived.” Kitty’s name is Non and she calls it Nonchan (term of endearment).”

Photo source: JEARS Facebook page. This photo was taken in a small shelter in Sendai. The building was water damaged, and there were overturned cars and debris everywhere. Miraculously, the 60+ cats inside were all okay.

For more on the earthquake in Japan, please read:

Help the animals in Japan

Radiation concerns and your pet

8 Comments on Update on animal rescue efforts in Japan