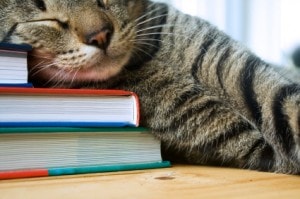 I love reading cozy mysteries.  They usually feature a strong, intelligent female amateur sleuth with an interesting profession.  The lead characters range from coffee shop owner to dog trainer, florist to quilter, librarian to homemaker.  They’re frequently set in small towns, and feature a cast of sometimes quirky secondary characters.   Somehow, they get involved with a murder investigation, and frequently, local law enforcement either does not take the amateur sleuth’s efforts to help solve the crime very seriously, or is looking at the wrong perpetrator.  Cozies are fun, easy reads that engage the while providing entertainment.  I particularly enjoy cozies that are part of a series, especially since for me, the setting and characters are almost more important than the actual murder mystery.  I love being able to meet the same cast of characters again and again.  It’s a little like spending time with old friends.

Many of these cozies feature cats, and of course, they are my favorites.  I’ve reviewed a number of them by various authors here on The Conscious Cat, and I previously introduced you to Lorna Barrett, the author of the Booktown mystery series featuring Miss Marple, the (sometimes sleuthing)cat. 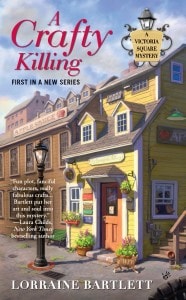 When Lorraine Bartlett (Lorna’s real name) asked me to review A Crafty Killing, the first in her Victoria Square Mystery series, I jumped at the chance. Even though the two cats featured in  A Crafty Killing are not a large part of the book, one of the cats plays a crucial role when it comes to resolving the story, so I decided that that was enough to qualify it as a “cat mystery.”  And besides, I loved the book, so I wanted to share it with you.

The book features Katie Bonner, a young widow.  When Ezra, her decesased husband’s business partner, is found murdered, Katie finds out, much to her surprise, that his will designates her as executor of his estate.  She takes on managing Artisan Alley, a collection of booths for artisans and crafters located in a renovated apple warehouse in Western New York.  When she begins to dig into the business records, she finds that Artisan Alley is in dire financial straits.  As Katie attempts to revive the failing business, she also becomes involved in investigating Ezra’s death – and begins to wonder whether perhaps her husband’s death was not an accident, as it was ruled.

A fast moving plot, a likeable heroine, well-developed secondary characters, a wonderful sense of place, and a fascinating look into some really unique crafts make this a thoroughly enjoyable read.  And even though the two cats only make cameo appearances, they still added to my enjoyment of a delightful cozy.  I’m already looking forward to the next one in the series.

I received an ARC copy of this book from the author.