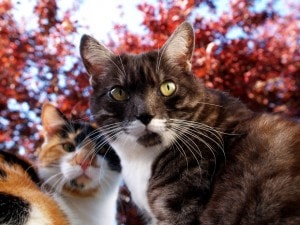 I’m always tempted to answer this question with “because they can” – after all, they’re cats, and most cats think, or rather know, that they rule the world.  However, there are “real” answers to some of these questions, and here’s a sampling.

Why do cats knead with their paws?

We’ve all seen them do it.  It’s also known as “making biscuits.”  The most common explanation is that it reminds them of when they were kittens and pawed at their mother’s teats to stimulate milk secretion.  It’s why cats seem to be so content, and almost go into a trance, when they knead – kneading takes them back to one of their earliest happy memories.  Most cats purr while they knead, and some will even drool.

Why do cats like to weave through and rub up against their human’s legs?

Most people think they do this to show affection, although perhaps, if that’s what it is, cats should find a better way to show that they care than by trying to trip the human who fills their food bowl.  What they’re actually doing is marking you with their scent.  Cats have scent glands on the side of their face and on the tip of their tail.  These glands produce pheromones, and by rubbing up against your legs multiple times, they’re mingling their scent with yours.  You now belong to them, as it should be.

Why do cats inevitably find the one person in a room who doesn’t like cats?

Unless your cat is the most gregarious and social cat on the planet, he’ll be a little uncomfortable walking into a room full of strangers who are all cooing or staring at him, so he’ll zero in on the one person who is completely ignoring his presence, perceiving that person as less intimidating.

What makes a cat purr?

Scientists are not sure about the exact mechanism behind purring, but the most common explanation is that the cat’s brain sends a signal to the laryngeal muscles to vibrate.  At the same time, the cat is inhaling and exhaling, and the stream of air is causing the vocal chords to vibrate.  Even though most people assume that cats purr when they’re happy and content, purring can also be a sign of stress, such as during a visit to the veterinarian, or after an injury.  The purr is thought to comfort the cat in these situations.

Why do cats race around the house like crazy without warning?

Even though they live in our homes and eat from a bowl, cats are natural hunters, and they’re designed for the speed of the hunt, especially when they’re young.  In an environment where there’s nothing much to hunt, chasing imaginary prey through the house may be a way for them to release pent up energy.

What do your cats do that you’ve always wondered about?

59 Comments on Why Do cats Do That?