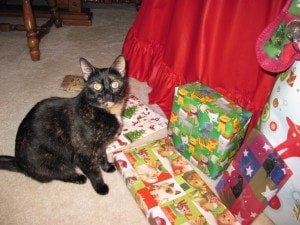 There’s been so much cool stuff happening around here, I don’t even know where to start!  For the past week, Mom has been bringing out lots of fun toys:  big rolls of paper, crinkly tissue paper, and, best of all, bows and ribbons!  I actually don’t think she brought them out for me, because she put them on the dining room table, and I don’t usually play up there.  And Mom doesn’t usually play unless it’s with me, but she started playing with those toys, so I, being the good kitten daughter that I am, had to go help her.  Mom said what she was doing is called wrapping gifts.  Whatever – it was great fun!  I grabbed some of the bows and took off with them, making Mom chase after me.   Things got even more interesting when Mom got ready to put some ribbon on one of the gifts she was wrapping.  I tried to help by batting at the ribbon and chewing on the ends, and I couldn’t understand why she kept telling me no (I also don’t think she was all that serious about the “no,” because she kept laughing).   I think eventually  Mom decided that her presents wouldn’t have any ribbons on them.   She said it’s called “the path of least resistence.”  I think those are just big words for spoiling my fun. 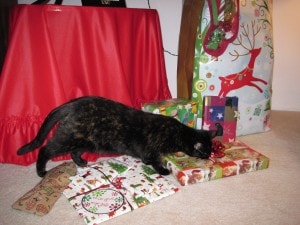 But the best thing happened this past weekend.  All of a sudden, there were all these packages under our Christmas tree.  Where did they come from?  Mom said Santa brought them.  I don’t know who this Santa is, but Mom explained that he brings presents to good little kittens, and that on Christmas, we’d be opening the packages together.  Wee!!!  That sounded like fun.  I like this Santa!  I helped Mom open the first package.   It was for me!  It was a really fun toy that looked like a giant piece of cheese.  I love cheese!  And there were little things inside the big cheese, so I had to immediately try to get them out.  I still haven’t quite figured out how yet, but I’ll  keep working at it. 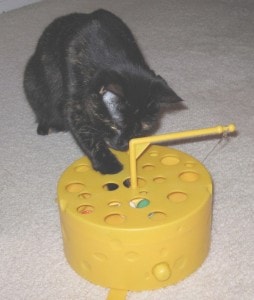 But that wasn’t all.  There were so many other packages!  Since I was happily playing with my big cheese, Mom opened some of her packages without my help.  The stuff in them wasn’t very interesting, but the growing pile of wrapping paper was, so I stopped playing with my big cheese and went to check it out.  I crawled under the paper, rustled around in it, and pounced on it.  Way cool!  After letting me have some fun with the pile, Mom said there were more packages for me, so I helped her open them.  So many fun toys!  I didn’t even know what to play with first.  In fact, to be totally honest, I got a little overwhelmed with everything.  I didn’t know it was possible for a kitten to be so loved and to get so many gifts.  How lucky am I! 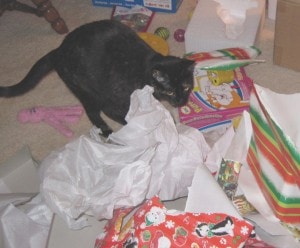 After we had opened all the packages, Mom started gathering the pile of paper and the bows and ribbons.  I asked her whether we could just keep them out since they were so much fun to play in, but she nixed that idea.  Humans – they can be such spoil sports.  But I didn’t mind too much since I have all these fun new toys to play with. 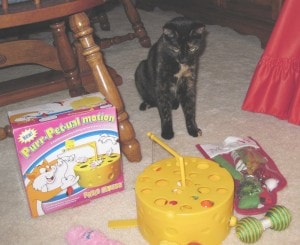 After all this excitement, I needed a long nap – and I took it in Mom’s lap, while she was sitting by the Christmas tree.  Mom listened to some music, and I slept.