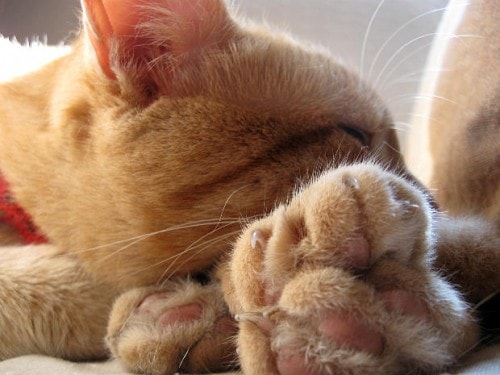 Allegra and I are getting mother daughter pedicures today.  I’ll be going to my local nail salon.  Allegra’s nail technician makes a house call.  Yes, I admit it:  despite trimming countless cats’ nails as a veterinary assistant, and educating clients on how to do it, I can’t trim Allegra’s nails  without having someone help me.

Cats’ nails, especially when they’re kittens, are very sharp, and they don’t just hurt when they’re used on you, they can also damage furniture and carpet.  Having plenty of scratching posts and training your cats to use them will help with that aspect, but keeping cats’ nails trimmed is important for other reasons.  Cats’ nails grow very fast, and if not trimmed, can grow into the pads of the paws, which is a very painful condition that will require veterinary attention.

The time to get your cat used to having her nails trimmed is when she’s a kitten.  Play with her paws, squeeze the paw pads, touch the nails, but stop as soon as the kitten fights you or starts to bite at your hand.  Eventually, as the kitten gets used to having her paws handled, you can start using nail trimmers especially designed for pets.  Do not use scissors, they can split your cat’s nails.  You’ll also want to have some styptic powder on hand in case you cut the nails too short and make the quicks bleed.  If you don’t have styptic powder, a black (caffeinated) tea bag applied with gentle pressure works equally well.  To avoid cutting the quick, clip only the tip of the nail; when in doubt, err on the side of caution and take off  less than you think you can.  You’re better off doing more frequent nail trims than making it a painful experience your cat will dread every time she sees you bringing out the nail clippers.  You may only be able to do one or two nails at a time – always stop when the cat starts resisting or struggling.

If you’ve tried the desensitization approach and your cat still won’t let you trim her nails, there are several options.  You can try wrapping your cat in a towel (the kitty burrito approach), exposing one leg at a time.  You can get someone to help you, so one of you can restrain the cat while the other person trims the nails.  Make sure that your helper knows how to properly and safely restrain a cat.  And of course, you can also take your cat to your veterinary clinic for her pedicure.

An alternative to nail trims are soft nail caps that are glued onto the cat’s claws so they can’t do any damage when the cat scratches.  You can do this yourself, or have it done at your veterinary clinic.  I’m not a fan of these nail caps.  The cat’s paws will still have to be handled to apply the caps, and nails have to be trimmed prior to application, so if you’re able to do that, then why not just trim the cat’s nails, period.  Additionally, once the caps are on, cats won’t be able to retract their claws, and I can’t imagine that feels very good to them.

I tried the desensitization approach described above with Allegra when I adopted her at seven months old – with very little success.  She was a play biter and touching her feet only encouraged her to bite.  I was using multiple behavior modification methods to get her to stop biting, and I realized I was pushing my luck trying to get her used to nail trims until I had addressed her other issues.  So for now, a friend helps me, and nail trims take 30 seconds for all four paws.  There are plenty of treats afterwards (for Allegra, and for my friend, too).

How do your cats feel about having their nails trimmed?

52 Comments on Trim Your Cat’s Nails the Right Way, and Nobody Gets Hurt