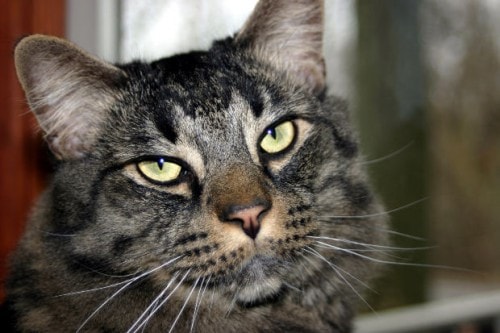 Diabetes in humans has reached epidemic proportions.  Statistics from the Centers of Disease Control show that in 2007, nearly 24 million Americans had diabetes.  Statistics are no less alarming when it comes to cats.  Just as for humans, there has been a tremendous increase in diabetes in cats over the past decade.   Diabetes affects as many as 1 in 50 cats, with overweight cats being especially prone to the disease.

Diabetes results from inadequate production of insulin by the pancreas or an inadequate response of the cells to insulin.  Without insulin, the body can’t utilize glucose.  This results in elevated blood sugar levels (hyperglycemia).  In diabetic cats, excess glucose is eliminated by the kidneys,  producing frequent urination.  This in turn leads to increased water consumption to compensate for the increased urination.

There are three types of diabetes in cats:

Type I:  Cats are insulin dependent and need to receive daily insulin injections because the beta cells of their pancreases are not making enough insulin.

Type II:  The pancreas may make enough insulin but the body cannot utilize it properly.  This is the most common type of feline diabetes.  Some of these cats will require insulin as well, but others may get by on dietary changes and oral drugs to control blood glucose.

Type III:  This is known as transient diabetes. These are type II cats who present as diabetics and require insulin initially, but over time, their system re-regulates so they can go off insulin.

While diabetes can affect any cat, it mostly presents in older, or overweight cats.  The four classic signs noticed by most cat owners are an increased, almost ravenous appetite, weight loss, increased urination, and increased water consumption.

Diabetes is diagnosed with a thorough physical exam and laboratory testing of blood and urine.  If the cat’s glucose is elevated, a second blood test, called a fructosamine, will provide more information.  This test measures the average level of glucose control over the past few weeks.

Diabetes is treated with a combination of diet, insulin, or oral glucose medications.

What causes diabetes in cats?

While diabetes can affect any cat, it occurs more frequently in middle-aged and older, obese cats.  It is more common in male cats.  The exact cause of the disease in cats is not known,  but obesity and poor diet seem to be major factors.  Other causes may include chronic pancreatitis, other hormonal diseases such as hyperthyroidism, and certain medications such as steroids.

The link between diet and diabetes

More and more evidence shows that diabetes in the cat is a preventable disease, and is most likely caused by the high carbohydrate content of most commercial pet foods, especially dry foods.  Since so many cats eat primarily dry food, these poor-quality, highly processed, carbohydrate rich diets that are the equivalent of sugared breakfast cereals are increasingly thought to be the major culprit for the epidemic increase in diabetes in cats.

A diet high in meat-based protein and free of grains and carbohydrates, either raw or canned, is not only the ideal diet for cats to prevent diabetes in the first place, but should also be the diet of choice for a diabetic cat.  Veterinarians vary in their approach when it comes to diets for diabetic cats.  Many traditional veterinarians still use high-fiber diets for these cats, but more and more holistic vets as well as feline vets have turned away from this approach.  Dr. Elizabeth Hodgkins makes a convincing case for how a grain-free diet can help diabetic cats and reduce, or even eliminate, the need for insulin.  Her website Your Diabetic Cat provides a wealth of information on the connection between diet and diabetes.

There is no cure for diabetes.  However, with proper dietary management, some cats may no longer need insulin.  If diabetes has resulted from consumption of a poor quality diet and/or obesity, it is likely to improve or even completely resolve once the cat’s weight is under control.

14 Comments on Diabetes in Cats: Treatment and Prevention