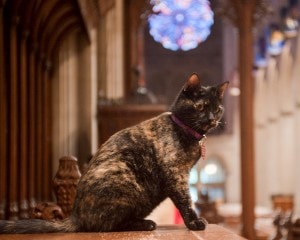 There are probably any number of cats who live and work in churches and cathedrals around the world, but only one cat can call Washington National Cathedral home – and she’s a tortoiseshell cat.

Her name is Carmina.  She is about eighteen months old, and was rescued by the Washington Humane Society, along with her litter of week-old kittens, from a deserted parking lot in Southeast Washington D.C.  The kittens had all found new homes after being fostered, but Carmina was going to be returned to the shelter, facing an uncertain future.   Cathedral Choral Society staffer Victoria Chamberlin did not want to see this happen, and led the charge for the Choral Society to adopt Carmina during its audience sing-a-long of Carl Orff’s Carmina Burana. 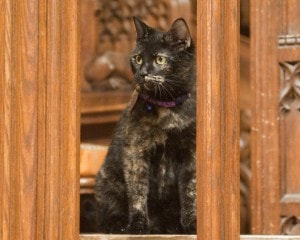 Carmina initially came to the cathedral for a one-month-trial period.  She turned out to be friendly and independent, and was ultimately chosen for her personality and her mouse-catching skills, which, Chamberlin says, are impeccable.  Carmina succeeds Catherine of Tarragon, a tuxedo cat who was adopted by the cathedral as a kitten 16 years ago to catch mice in the cathedral’s green house.  Catherine recently retired and now lives out her golden years in a private residence in Georgetown.  She summers in the Outer Banks of North Carolina.

Carmina leads a busy life.  She welcomes cathedral staff to work in the morning and usually wanders from office to office for petting, treats, and some play time.  In the afternoons, she likes to be outside to hunt mice before coming back inside for a nap and a snack.  She enjoys climbing trees, walking along pipes in the ceiling, and chasing her toy mice.  She doesn’t like having her ears cleaned, and she loves anything with turkey flavor. 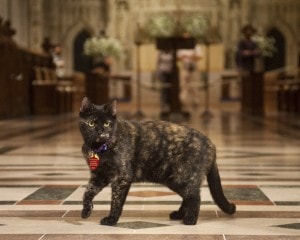 Her favorite places are her bed at the top of the stairs, the window sill in the library, or the slate walkway in front of the library.  She is a lap cat and distributes her attention equally among staff members.  All of the Cathedral Choral Society staff take turns feeding and caring for her.

I asked Chamberlin whether Carmina attends services.  While Carmina is friendly, she tends to avoid crowds, so Chamberlin thinks she will probably  be sleeping in on Sundays.  The only service she has attended to date was the Blessing of the Animals.

If you’re in the Washington DC area, or are coming for a visit, Washington Cathedral is well worth adding to your list of places to see.  And you just might get to meet Carmina the Cathedral Cat.

17 Comments on Carmina the Cathedral Cat