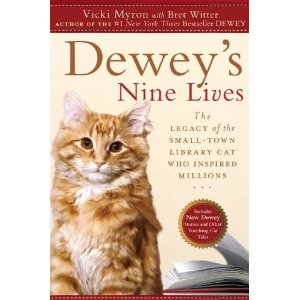 In Dewey’s Nine Lives:  The Legacy of the Small-Town Library Cat Who Inspired Millions, Vicky Myron offers nine stories about some very special cats, inspired by the thosands of letters and e-mails she received from readers around the world after the phenomenally successful publication of Dewey:  The Small-Town Libary Cat Who Touched the World.  In these letters, readers told Myron how Dewey had touched their lives and shared heartfelt stories of their own special cats.  You’ll read about a determined black cat who changed a Vietnam veteran’s life for the better.  You’ll hear about a spirited kitten who brings back one woman’s childhood memories of a lost mother.  You’ll learn how a city cat with a rough start in life accompanies her adopted human through a series of major life changes.

Myron chose inspirational stories about people who were down on their luck, who mostly came from small towns, and who were faced with tough challenges.  Given Myron’s own background, it is not surprising that these stories resonated deeply with her.   At times, the stories focus a little too much on the humans’ backgrounds, but in the end, it’s always the cats in the stories who not only saved the day, but often saved their humans’ lives – maybe not literally, but most definitely figuratively speaking.   The cats in the stories are a testament to the healing power of cats – they opened hearts, inspired change, and transformed lives.

Dewey himself is woven throughout the book.  There are some Dewey stories that were not included in the first book, and Myron shares what her life has been like after Dewey.  I was particularly delighted by the book’s final chapter as it answered a question I had been wondering about.

Like most sequels, this, too, does not quite live up to the first book, but it is a thoroughly enjoyable, heart-warming book which will make you hug your own cats just a little harder and thank them for all they’ve brought into your life.

For more about Dewey’s Nine Lives, and to see some of the cats featured in the book, watch the book trailer:

Would you would like to see your cat’s story featured in the paperback edition of Dewey’s Nine Lives?  Penguin Books is hosting an I Believe In Dewey’s Magic Story Contest, looking for true tales highlighting how a cat has impacted your life or the life of someone you know.

This book was sent to me by the publisher for review.