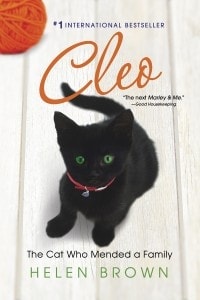 The cats’ day has finally come when it comes to pet memoirs.  A genre that used to be almost exclusively ruled by dogs has finally seen a number of wonderful cat memoirs.  It began with Dewey, the library cat.  Then came Homer’s Odyssey.  And there are many more, you can find several of them reviewed here.  And of course, there’s my own Buckley’s Story.  And now, there’s Cleo.  Helen Brown’s international bestseller, first published in New Zealand, Australia and the UK, was released in the US on August 31 by Citadel Press.

“We’re just going to look.”  Helen Brown had no intention of adopting a pet when she brought her sons, Sam and Rob, to visit a friend’s new kittens.  But the runt of the litter was irreristible, with her overlarge ears and dainty chin.  When Cleo was delivered three weeks later, Brown’s family had just been hit by a tragedy:  the loss of her young son, Sam.  Helen was sure she couldn’t keep Cleo at a time like this – until she saw something that she thought had vanished from the earth forever:  her son Rob’s smile.  The reckless, rambunctious kitten stayed.

What follows is a sweeping memoir of heartbreak, changes, new beginnings, and ultimately, happiness.   Cleo is the connecting thread through it all, holding Brown’s family together through devastating grief, illness, moves across continents, and other challenges life throws at them.  It will come as no surprise to cat lovers that one small cat is capable of what Cleo managed to do for the Brown family – she not only healed their hearts, but helped them find a way to integrate Sam’s loss into their lives in ways that honored his memory, but also allowed them to move on with their lives.  Brown’s writing is vividly descriptive and sometimes almost lyrical and poetic.  She transports us to the beauty of New Zealand as easily as she makes us fall in love with the small kitten with the big ears.  She makes us feel the unbearable pain of loss, and lets us breathe easier right along with her as her family begins to mend.

In addition to being a wonderful cat book, a beautiful memoir, and a spell-binding read that was hard to put down, it’s also a book about loss and grief, and how to cope with the almost unimaginable – the death of a child.  By sharing her own experience with great openness and sensitivity, Brown gives hope to others who are trying to cope  with life after loss.

This book goes on my list of best cat books ever – for me, it’s right up there with such classics as A Snowflake in My Hands and The Cat Who Came for Christmas.  Don’t miss this one.

Helen Brown was born and brought up in New Zealand, where she first worked as a journalist, TV presenter, and scriptwriter.  Now living in Melbourne, Australia, with her family, Helen continues to write columns for the New Zealand media.  You can find more information about Helen on her website.

Look for an interview with Helen Brown on The Conscious Cat on Wednesday.

I received an ARC copy of this book from the publisher.

11 Comments on Book Review: Cleo – The Cat Who Mended a Family by Helen Brown