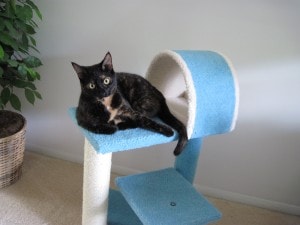 I’ve been a busy little kitten!  There’s always so much to do, a kitten’s work is never done.  I’ve got to keep an eye on the birds and squirrels in our yard – that’s almost a full time job right there!  And lately, we’ve had these very strange looking creatures attach themselves to the screen on the sliding glass door.  Mom says they’re called cicadas.  They’re really ugly, and when I try to bat at them, they make a scary noise and fly off!  Oh, and speaking of critters – this is the coolest thing yet since I came to live here.  These big black things are coming into the house sometimes, mostly in the basement.  Mom says they’re called crickets.  I say they’re really fun toys!  I chase them and they jump all over the place.  Wee!!!   The only thing is that they don’t seem to last very long, because I’m too fast for them!  But, unlike my other toys, I can eat them!  Yummy!  I do leave the legs behind, though – a little too crunchy for my taste.  Mom says it’s gross when I eat the crickets, and that she’d rather not know that I do that.  Ha!  I’m a fierce huntress!  This is what I do!  I bet she wouldn’t like it, either, if I left their dead bodies all over the basement.  Humans – sometimes they just don’t get it.

Speaking of toys – I got another cool new one.  Mom bought me a new cat tree.  You can see me posing on it in the photo above.  I really like it, especially the sisal scratching post, I use that a lot.  And I love it when Mom gets one of those fishing pole type toys and teases me with it around the cat tree.  I jump up and down and roll around at the base of it, it’s great fun.  Wee!!!  My birthday is only a couple of weeks away, and I’ve seen Mom take a box inside the one room downstairs that I’m not allowed in.  I wonder whether my birthday present is in that box?  It was a pretty big box!  Wee!!!  It sure is fun living here, so many toys, and so many presents.  Every day is so special!

I like that Mom works from home, and that she’s around a lot, so it was a little weird the other day when she was gone for a really long time.  She left right after our morning playtime, and she told me she would be gone all day, and that she would be back in time for me to feed me my dinner, but it still felt like a very long day without her there.  I slept for most of it, but then, I got a little bored.  Mom says I always look for trouble when I’m bored, and apparently, going by how she reacted, I found it.  I didn’t think it was that bad – all I did was chew on the edges of a book that stuck out from a lower shelf.  Oh, and I did knock her glasses off the nightstand.  But I do that all the time, and she just picks them up and puts them back.  Okay, so I did chew on the ends this time, and I guess they feel a little funny now when she puts them on.  Big deal!  That’ll teach her to leave me alone for that long!  Even though she said “oh, Allegra” in that tone of voice that I’ve come to know means she’s a little upset with me, I could tell that she tried really hard not to laugh, too.  I know I’m too cute for her to stay upset with me for long!

Oh, and I almost forgot – Mom has been feeding me some different food lately.  She says it’s called “raw” – I say it tastes really yummy!  I’m not a big eater, food kind of bores me,  most of the time I’m just too busy to eat, but this stuff, I usually inhale in one sitting.  It comes in different flavors, so far, I’ve had rabbit, chicken and turkey.   I like them all, but I think I like rabbit best of all.  Yummylicious!!!

That’s all for today – time to make the rounds and check on the birds and squirrels!