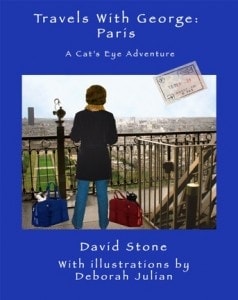 Most cat parents can relate to this dilemma:  you’re about to go on the vacation of your dreams, and you’re excited – but, you also hate leaving your cats behind.  No matter how well you know they’ll be taken care of in your absence by pet sitters, neighbors or friends, you know you’ll miss them every single day.  But what if you cats could come on vacation with you?  And what if you didn’t even know that they tagged along?

In Travels with George:  Paris:  A Cat’s Eye Adventure, George, a much-loved indoor cat living in a New York City high-rise, and a bit restless in his restricted, secure environment, craves adventure.  When his humans prepare to go on a trip to Paris, he seizes the opportunity and hides himself  in their luggage.  When he next sees the light of day, he finds himself in a Paris hotel room.  Much to his surprise (not to mention his humans’ surprise!), his younger cat friend Billy has stowed away, too.

After the initial surprise wears off for the cats’ humans, and basic needs such as litter box, food and water have been satisfied, the two humans decide that, rather than leaving the two cats in their hotel room all day while they’re off sightseeing, they’ll include them in touring Paris.  The reader follows along as George and Billy discover the beautiful city on the Seine while either being comfortably carried (well, comfortable for the cats, at any rate!) in two secure bags, or walking on harness and leash.  They encounter such sights as the Eiffel Tower, the Champs-Elysee, and the Jardin du Luxembourg (a particular favorite with both cats).  They even get to take a boat ride down the river Seine.

Through the eyes of George, the reader follows along as the two cats and their humans explore the city and gets to experience Paris from a cat’s point of view.  George gets to know aspects of the outside world that he’s only been able to see from his window in the past.  Charmingly told by Stone, and beautifully illustrated with Deborah Julian’s whimsical full-color prints, this book is a delightful fantasy, travelogue and cat story all rolled into one thoroughly enjoyable package.

David Stone is the author of two other works of fiction, The Garden of What Was and Was Not, a counterculture classic, its sequel, Traveling Without A Passport, and of the nonfiction title: A Million Different Things: Meditations of The Worlds Happiest Man.