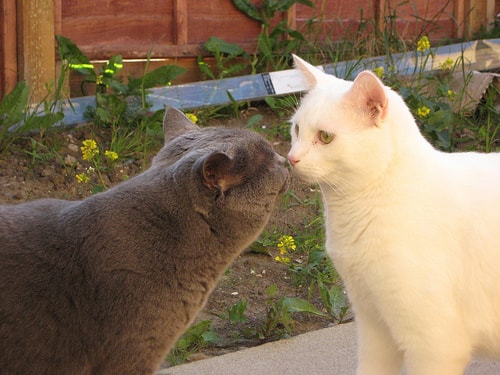 Feline Immunodeficiency Virus (FIV) is an often misunderstood condition.  According to the Feline Health Center at Cornell University, the virus affects approximately 1.5 to 3 percent of healthy cats in the United States, with slighly higher rates in cats that are sick or at high risk for infection.  FIV is a lentivirus, which means it moves very slowly, and it gradually affects a cat’s immune system.  It is passed from cat to cat through blood transfusions and serious, penetrating bite wounds.   FIV cannot be transmitted to humans.

There are a lot of misconceptions about this virus, and contrary to what many people believe, FIV cats can live long, healthy lives if cared for properly.  My former office cat, Virginia, lived to be 14, despite her FIV positive status.  This article hopes to dispel some of the myths surrounding this virus and provide a better understanding both for those who live with an FIV positive cat, but also for the many FIV positive cats in shelters and with private rescues who are looking for loving homes.  The fact that a cat has the virus should not automatically eliminate her from being considered for adoption!

Myth:  FIV can be spread through casual contact, such as cats sharing the same food or water bowls, or cats grooming each other.

Fact:  FIV is transmitted primarily through deep, penetrating bite wounds.  Casual, non-aggressive contact of cats living in the same household does not spread the virus.  On rare occasions, the virus is transmitted from the mother cat to her kittens, usually during passage of the kittens through the birth canal, or when they ingest infected milk.

Fact:  Infected cats may appear normal for years.  The only way to diagnose FIV is through a blood test.  A positive test indicates the presence of antibodies.  Since there is the possibility of false positives, veterinarians often recommend retesting, using a test with a different format.  In kittens born to an FIV positive nursing mother, antibody tests will most likely show positive results for several months, although these kittens are unlikely to be infected.  The kittens should be retested every two months until they’re six months old.

An infected cat may not show any symptoms at all, or his health may either deteriorate progressively,or show a pattern of recurring illness followed by long periods of good health.  Once FIV positive cats become symptomatic, you will typically see poor coat condition, loss of appetite, fever, inflammation of the gums and mouth (gingivitis or stomatitis), chronic and recurring infections of various organ systems, persistent diarrhea, slow weight loss, and various cancers and blood diseases.  Since all of these symptoms can be indicative of any number of other conditions, it’s important to work closely with your veterinarian if you have an FIV positive cat.  A case of “just not doing right” in a healthy cat that may resolve on its own in a day or two could be a precursor to a more serious condition in a cat with a compromised immune system.

Myth:  There is no treatment for FIV.

Fact:  While there is no cure for FIV, the disease can be managed by keeping FIV positive cats indoors, providing a healthy, balanced diet (due to the compromised immune system in these cats, raw feeding is not recommended), and regular, at least bi-annual veterinary check ups.  Vigilance and close monitoring of health and behavior is even more important in these cats than it is in other, healthy cats.

Fact: Many cats with FIV live well into their teens if they are receiving proper care and monitoring throughout their lives.

There is a vaccine available that is supposed to protect cats against contracting FIV, but the effectiveness is poorly supported by current research, and there is also a small risk of the cat developing sarcomas at the injection site.  Additionally, cats will always test positive for FIV after receiving the vaccine, so if they become ill later in life, there will be no way to eliminate FIV from the diagnosis.

An FIV infection does not have to be a death sentence, and it is not necessary to get rid of a cat who tests positive.   It also shouldn’t preclude adoption of an FIV positive cat.