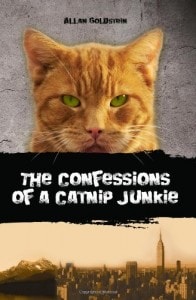 As much as I love cat themed books, books about cats, and books by cats, it’s rare to come across one that I absolutely cannot put down.  I started Allan Goldstein’s The Confessions of a Catnip Junkie expecting to be entertained.  What I didn’t expect was that for the two days it took me to read it, I didn’t get much of anything else accomplished, so be forewarned – don’t start this book unless you  know you’ll have a good chunk of uniterrupted time ahead of you!

Written from the perspective of an orange long-haired cat named DooDoo, The Confessions of a Catnip Junkie is the account of DooDoo’s six thousand mile journey across America.  A self-confessed catnip addict, DooDoo lived with two much adored humans after having been abandoned by his mother in the backyard jungle of San Francisco.  However, DooDoo has an adventurous streak.   One day, a sudden impulse sends him into the wilds of San Francisco and beyond.  After the initial thrill dissipates, he realizes that he is lost, and he wants to find his way home again.  Never in his wildest dreams would he have imagined that it would take him a year, and that along the way he would encounter a subway cat named Rass who becomes his new best friend, help a homeless drunk find his way home, a minor league baseball player and a smalltown TV reporter find the big time, and a widowed pilot find peace.

DooDoo’s adventures will touch your heart while keeping you on the edge of your seat.  Goldstein has an amazing ability to present DooDoo’s breathtaking adventures from a cat’s point of view, and at times as you may recognize your own tamed tiger’s antics in the pages.  You will be routing for DooDoo and his sidekick, Rass, as they encounter one challenge after another.  At times, I got so caught up in the action, I had to actually skip some sections to make sure that DooDoo and Rass were going to be okay and then go back to catch up on the missed details – I just couldn’t bear the suspense!

This is a wonderful, entertaining, touching and well-written book.   If you’re looking for a fun, engaging summer read, you won’t regret picking this one up.

Allan Goldstein lives in San Francisco with his wife, Jordan, and a minimum of two cats. You can  learn more about Allan on his website, allangoldstein.com. Doo Doo cat lived in San Francisco with the above family. He wants you to know he was as beautiful, loving and wild as described in these pages, and continues to be so in the eternity beyond. He considers Mr. Goldstein to be his faithful literary executor and will expect his cut of the royalties when they meet again.

11 Comments on Book Review: The Confessions of a Catnip Junkie by Allan Goldstein