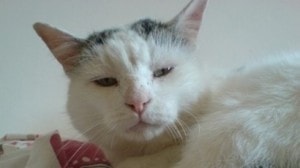 When I first began working in veterinary hospitals, I did a little bit of everything.  I worked as a receptionist, veterinary assistant, and kennel attendant.  Being a kennel attendant involved taking care of animals that were boarding at the hospital, which included everything from cleaning their cages, making sure they had fresh food and water, walking them, and giving them medications if needed.  I loved kennel duty despite the less glamorous aspects of cleaning cages and litter boxes and cleaning up after the dogs after taking them out in the hospital’s small backyard.  Kennel duty, especially on weekends and holidays, gave me a chance to spend time with individual animals, time that wasn’t always available during the busy work week when we had surgical patients and pets coming for vet appointments.  I became particularly fond of several frequent boarders, and one that still sticks out in my mind after all these years was a cat named Oliver.

Oliver was a 19-year-old white cat with some brown and black tabby markings.   He was hyperthyroid, and he had kidney disease.  He was skin and bones.  His owners traveled frequently for a few days at a time, and they would board him with us, feeling more comfortable having a veterinarian available in case one was needed rather than leaving Oliver at home in the care of a pet sitter.  He was the first of many geriatric cats that I fell in love with.  There’s something about these wise old souls with their sweet old faces that has always touched my heart.  Oliver needed a lot of special attention while he was boarding, and I gladly gave it to him.  He often needed to be handfed because his appetite was hit or miss.  He wasn’t always cooperative when it came to taking his medication.  But he always, always wanted lots of affection, and he was very vocal both about requesting it and in his appreciation of it – he would start out demanding to be petted with a loud, plaintive cry, and then he’d show his appreciation with a faint, but steady purr.

Even when I had a kennel full of pets to take care of during my shift, I always made extra time for Oliver.  I wasn’t required to be there all day on weekends or holidays, the animals needed to be taken care of three times a day, and depending on their needs, there was often time in between the morning, mid-day and evening shifts to go home for a couple of hours, but when Oliver was boarding, I usually stayed between at least two of my shifts and just sat with him purring away in my lap.

Each time Oliver went home after boarding at the hospital, I always wondered whether I’d see him again.  At his age, and with his multiple health problems, I knew he didn’t have that much time left.  So each time he was boarding, on my last shift during his stay, I made sure to say a proper good-bye, just in case it was going to be the last one.  And I hoped that if, in the end, he reached a point where euthanasia was indicated, it would happen on a day when I was working so I’d get another chance at one last good bye.

Sadly, I got my wish.  A few days before his 20th birthday, his family brought Oliver to the clinic.  I was asked to assist with his euthanasia, and I got to say good bye to my grizzled old friend one last time.  I had assisted with euthanasias before, and usually managed not to cry until after the client had left, but this one was different.  I couldn’t hold back my tears as I assisted the vet.  Oliver passed away peacefully, surrounded by his family, and one veterinary assistant who’d fallen in love with him.