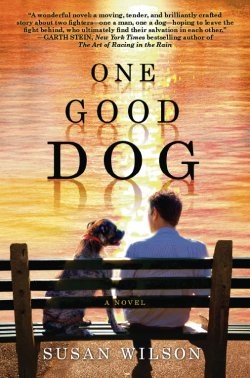 Today’s review is about a book with a d-o-g in it, but thankfully, Amber allows me to read them every one in a while.  I would have hated to miss One Good Dog.  In the tradition of Marley and Me and The Art of Racing in the Rain, this is a moving book about how a dog changes a human’s life for the better.

Adam March, a ruthless, self-made Boston millionnaire seems to have it all, living a picture perfect life, surrounded by wealth and privilege.   Then, in one instant, all of that changes, and he finds himself alone, unemployed, and doing community service in a homeless shelter.  Chance, a pit bull mix bred as a fighting dog, living in a dark and vicious world, takes a random moment to escape from his captors.  Human and dog come together, and as One Good Dog unfolds, both fight for a chance at a new life.  This is a tale of love, loyalty, new discoveries, and redemption, told from the point of view of Adam March, but also from the point of view of Chance, the former fighting dog.

Wilson masterfully lets Chance tell the story in his own words.  Some of the passages describing his fighting life are disturbing, but his gradual introduction to the world of being a pet dog is charming and touching.  I found this book hard to put down.  The narrative from the two different points of view was fascinating and added to the pace of the story.  You’ll find yourself routing for the initially extremely unlikeable character of Adam March and for the tough dog with the rough beginning.

Entertaining, moving, and heartwarming, fans of dog memoirs, or pet memoirs in general, will thoroughly enjoy this book.

I’m giving away one copy of this book to one lucky reader.  For a chance to win, please leave a comment telling me why you want to win this book .  For an extra chance to win, tweet about the giveaway or share on Facebook and post the link in a separate comment.  This giveaway ends Friday, April 30.

27 Comments on Book Review and Giveaway: One Good Dog by Susan Wilson