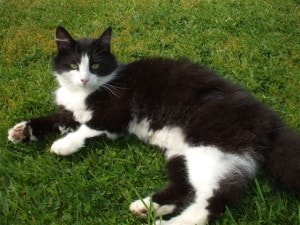 In this second installment in our Adventures in Veterinary Medicine series, meet Diesel.  Diesel was brought into the animal hospital by a client who had found him by the side of the road, barely breathing and clearly in pain.   His long black and white coat was matted, and he was covered in gasoline and motor oil.  The fumes coming off of him were enough to warrant wearing a gas mask – and yes, you guessed it, that’s how he got his name.  Veterinary clinic staff members sometimes have a warped sense of humor when it comes to naming strays.

When our veterinarian examined him, it turned out that he had a broken pelvis, and multiple contusions.   They gave him pain medication, and then the staff went to work with a mild detergent, washing the gas and oil off of him.  Diesel was patient and didn’t resist any of these treatments, he simply seemed relieved that his ordeal by the side of the road was over.  He was set up in a cage with a soft blanket, plenty of food and a warming lamp.  Once his fur had dried from the bath he was given, he got a gentle brushing.  The cat underneath all that gasoline and motor oil was a beauty.  He was a bit emaciated and had clearly been living outdoors fending for himself, but he had a loving and affectionate disposition, which made us believe that at some point, he may have been someone’s pet.   His wonderful personality  got him plenty of attention, petting, and being fussed over by everyone on the staff while he was recuperating.  The type of pelvic fracture he had did not require surgery, he simply needed to be kept quiet to allow the bones to heal naturally, and he received supportive care during his recovery.  No owner came forward to claim him during this time, so after a couple of weeks, he went to Casey’s House – coincidentally, the same private rescue group where Buckley came from.  Given Diesel’s personality, we didn’t think it would take long for him to be adopted.

A few days after he went to Casey’s House, Diesel began to develop some disturbing neurological symptoms, so he was brought back to our animal hospital for observation and care.   Since he initially came to the hospital covered in gasoline and motor oil, there was certainly the possibility that absorbing these toxic chemicals through his skin could have caused these symptoms.  However, since his vaccine history was unknown and he had clearly been a stray, rabies could not be ruled out.

Rabies is zoonotic, which means it can be transmitted from animals to humans.  The only way rabies can be diagnosed with 100% certainty is through a dFA test on the animal’s brain tissue, and for this, the animal has to be euthanized.   The thought of euthanizing a beautiful cat like Diesel without being sure that he really had rabies was emotionally challenging for all of us, but we also had to think of the risk to the humans who had come into contact with him.  Rabies is transmitted by the saliva of an infected animal, and contact with even a minor skin wound on a human can present a risk.  Rabies, once contracted, is always fatal if prophylactic injections are not started within 24-48 hours after infection.  Our hospital had a policy that only staff who was vaccinated against rabies could handle the occasional injured wildlife that was brought into our clinic, but we had not enforced this policy for stray cats, even though in hindsight, we should have.  Almost everyone on our staff had at some point petted and touched Diesel, whether they had been vaccinated or not.

The thought of euthanizing this beautiful cat if there was even a chance that he could recover was devastating.  Thankfully, Diesel made the decision easy for us.  He declined so rapidly, and it was clear that he was suffering, so euthanasia was not only the right thing to do for the humans involved, but also for him.  His rabies test came back positive.  Almost twenty staff members had to undergo a series of rabies vaccinations.

This story will always stick with me not because it was a hospital manager’s worst nightmare – making sure that everyone who came into contact with Diesel was identified and appraised of the risk and the need to get the series of injections, reassuring scared and worried employees, arranging for the health department to schedule the injections for our staff, dealing with the insurance companies involved – but also, because of Diesel.  Even though he had contracted this horrible disease in addition to being hit by a car, at least, thanks to the good Samaritan who brought him to our clinic, he was loved and cared for during the last few weeks of his life, even if it was at a veterinary hospital.   And in the end, he did not have to die alone.