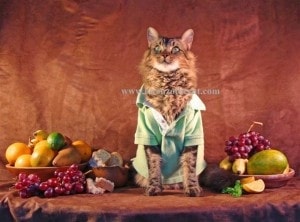 People often ask me what I do to get my cat, Lorenzo, to wear clothes. Do you bribe him with treats? Use toys to distract him? Put him on tranquilizers? I do none of those things. In fact, I do nothing other than slip the shirts over his head and onto his furry little body.

Ever since he was a kitten, Lorenzo has loved wearing clothes. I have no explanation for this other than the fact that he is one cool cat with the patience of a Buddhist monk. Or perhaps, just perhaps, he is a reincarnated fashion model who was just a tad too catty on the runway and has suffered a karmic set-back.

It all started when he was just a few months old and used to steal dirty clothes from my laundry basket. He’d drag them around the house, chew on them, and then curl up and go to sleep with them. It wasn’t much of a problem except when company came over and they spotted a rolled up ball of underpants beside the coffee table.

But one day I got mad at Lorenzo and decided to get even, so I placed a spandex tank top over his head and onto his body as a joke. Lorenzo was unfazed. He adjusted his shoulders, threw out his chest, and looked at me with an expression that said, “You think this bothers me? Well it doesn’t. In fact, I like it.” He walked around wearing that tank top for days.

For most cats, wearing clothing is unpleasant to say the least. Owners try to dress them up in silly costumes and take a photo for laughs. But the result is often a feline that looks as if it’s having an epileptic seizure—get this off me! There are other cats that just hunker down into a pose of utter humiliation and horror, especially if there is a hat involved. And then there’s Lorenzo, who struts his stuff like an Italian fashion model on the cover of GQ magazine.

I have had several cats before Lorenzo, and I never tried to put clothes on any of them. Nor did the thought ever enter my mind. But with Lorenzo, it seems natural. It’s as if he knows that that’s what he was put on the planet to do—wear clothes, pose for the camera, and make people laugh. I have been photographing Lorenzo wearing clothes for over a year now, and I must admit, doing it is one of the most fun and rewarding things I have ever done.

It’s fun because for Lorenzo, the camera is catnip. He responds to it, or more precisely, he responds to me when I have the camera in my hand. He knows what’s going on, and he is an active, earnest participant in the shoot. And when I know that I’ve gotten a good shot of him and I shout out loud, “bellissimo Lorenzo,” he preens, and turns his nose up in the air as if he knows that he has done a great job.

The rewarding part of the photography work is what I have learned from Lorenzo. One of those things is that the cliché of cats being stubborn and aloof is just that—a cliché. As I button up his shirt and then watch him through the lens, I marvel at how perfectly content he is while doing it. I marvel at how he has found his way in the world, and is totally willing to step outside the preconceived notion of a cat’s comfort zone. So what if he doesn’t act “normal” and defies the rules of standard cat behavior. So what if people laugh at him.

Yes, I may be reading more into this than other people can see, but I’ve always felt that we have a lot to learn from animals if we allow them to teach us. And what I’ve also learned from this Maine Coon cat is, shouldn’t we humans also shed what is safe and predictable in order to embrace something new no matter how weird we may look? Shouldn’t we humans drop the old clichés that have ruled our lives for so long?

Joann Biondi is a Miami-based writer and photographer. Her cat, Lorenzo, has his own website http://www.lorenzothecat.com and his own Facebook page .

19 Comments on The Cat Who Likes to Wear Clothes